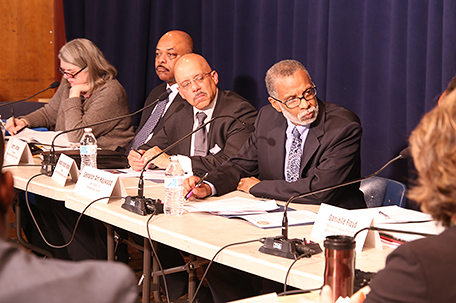 May 21, 2016 Category: Color Of Money Posted by: Philadelphia Sun Staff

HARRISBURG–SenatorVincent Hughes released the following statement on the Auditor General Eugene DePasquale’s audit of the School District of Philadelphia:

“I commend the auditor general and his team for their thorough review of the School District of Philadelphia’s finances. With the auditor general reporting that the Philadelphia school district has a structural deficit of $500 million, it’s clear the state’s broken charter school funding law is causing major damage to the Philadelphia School District and most likely to any public school districts across Pennsylvania which have a significant number of charter schools. The real question is how many more reports do we need to make the obvious conclusion?

“What’s also clear from this report is that this significant public institution cannot be operated halfway. It’s no surprise that the district had trouble tracking attendance after school secretaries were laid off. The same is true of keeping track of library books after massive layoffs of school librarians, with just 11 for 240 schools. We see this pattern repeated again and again.

“We can no longer accept an approach that running our schools with a financial and academic deficit is sufficient. Enough is enough. As long as our schools are underfunded, operate with a financing law that bleeds limited resources, and tolerates broken facilities as safe places for the education of our children, we are violating their rights and dropping the ball on our responsibilities.”

The children in low income school districts, like Philadelphia, are just as important as all of the other children in Pennsylvania. We should treat them as such and provide for them the education they deserve.”

Senator Vincent Hughes represents the 7th Senatorial District, which includes parts of Philadelphia and Montgomery County. He is also the Democratic Chairman of the Senate Appropriations Committee.