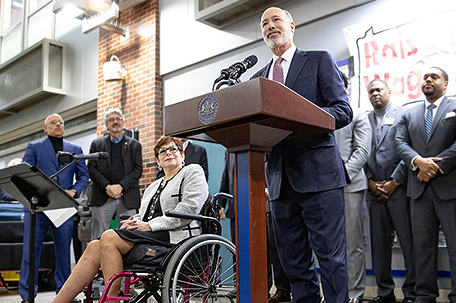 ABOVE PHOTO: State Sen. Christine Tartaglione with Gov. Tom Wolf at the meeting for the PA minimum wage hike.

“Let’s be clear about the people who we’re going to help by raising the minimum wage,” Sen. Tartaglione said. “It’s not just the teenagers who work at fast food restaurants, convenience stores, and other part-time, entry level jobs. The overwhelming majority of those who would see their paychecks get bigger – 90 percent in fact – are in their 20s or older. And half of them are full-time workers. On average, these folks earn more than half of their family’s total income.”

Wolf and Tartaglione each detailed the minimum wage proposal that the senator will soon introduce as Senate Bill 12.

The legislation would raise the minimum wage from $7.25 to $12 this year, followed by annual increases of 50 cents until it reaches $15 in 2025. After then, the minimum wage would be adjusted annually, automatically, based on the cost of living.

The legislation would also create safeguards to protect workers from employers who willfully underpay.

“I’ve said it before, I’ll say it today, and I’ll keep saying it – it’s past time that we raise the wage in Pennsylvania,” Gov. Wolf said. “Pennsylvania must be a place where hard work is rewarded, but our minimum wage hasn’t changed in a decade and too many hardworking people are struggling to get by. We must raise the wage.”

Raising the minimum wage to $12 this year would directly benefit more than one million workers, most of whom make more than the current minimum wage, but less than $12.

“This raise would put more money into their pockets, helping them to pay their bills,” Sen. Tartaglione said. “And it would inject billions of consumer dollars into our economy.”