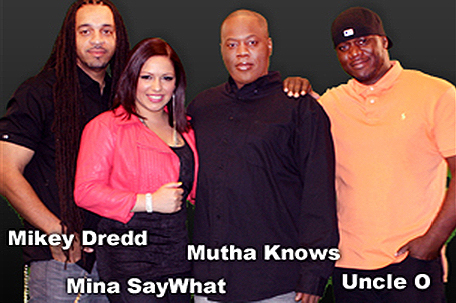 Power 99 FM’s “Rise and Grind Morning Show” features Mina SayWhat, Mikey Dredd and Mutha Knows. The show has maintained consistently high ratings, while serving the community by “stopping the music” to discuss critical issues, hosting “Peace on the Streets” events and conducting artist interviews with the biggest stars of Hip Hop and R&B.  Other popular features include Mina’s #Saywhat News, “The Tea” with Mutha Knows, and Carmen’s “Phone Jack.”

Mikey Dredd is the elder statesman of the group, who started on air with Power as part of the highly rated night time trio, ‘The Hot Boys.”  In seguing to mornings, Mikey has shown that not only is he one of the most versatile jocks in Urban radio, but his leadership has been instrumental in the team’s rating success.  Mikey also anchors the show with a daily viewpoint informed by his role as a devoted father of two and proud family man.

The incredibly sharp tongued Mutha Knows began his career by winning a ‘Who Wants To Be A Radio Intern?’ contest and has worked to become a fan favorite amongst the Power 99 listening audience.  His ‘The Tea’ segment airs four times daily during morning drive and is a can’t miss feature, with its juicy gossip delivered in a manner that only Mutha can.  In the process, Mutha has also become a proud voice in representing Philadelphia’s African American LGBT community.

Power 99 FM’s “Rise and Grind Morning Show” celebrity interviews have been featured in countless blogs across the country.   Last year the team made their debut in The Source Magazine’s Power List as one of the Top 30 Radio Personalities/Radio Shows in all of Urban Radio, coming in at #24.  The “Rise N Grind Morning Show” also recently celebrated their second Year Anniversary with a sold out concert last month at Philly’s legendary Tower Theatre, featuring Reality TV show superstar and three time Soul Train Award winning artist, Tamar Braxton.

Fans can listen to Power 99 FM on the station’s website, power99.com, as well as on iHeartRadio.com.