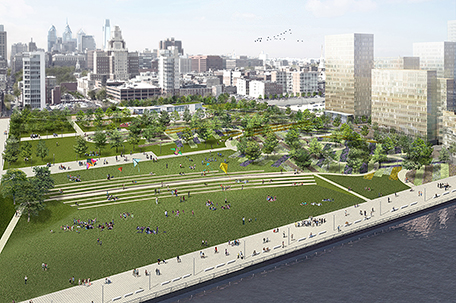 In a joint press event at Penn’s Landing, Pennsylvania Gov. Tom Wolf, Mayor Jim Kenney, and Janet Haas of the William Penn Foundation, announced their respective financial commitments to complete funding for a $225 million transformative project that will once again reconnect Penn’s Landing back to the City and nearby historic attractions, a connection that was broken when I-95 was constructed in the mid-70s.  They were joined by Councilman Mark Squilla (D-1st Dist.), PennDOT Secretary Leslie Richards, as well as representatives from the City and the Delaware River Waterfront Corporation.

“We are showing how partnerships between the public and private sectors deliver important benefits that improve both our quality of life and economy,” Wolf said. “In this case, as Interstate 95 will be rebuilt, we have partnered with the City and the William Penn Foundation to restore and enhance the river’s connection to Center City.”

In his budget address to City Council on March 2nd, Kenney announced that his fiscal year 2018 capital budget included a $90 million appropriation over a five-year period to complete the project. At the same time, Gov.Wolf’s spokesperson confirmed that the Commonwealth has identified $100 million of funding for the construction of the project. That commitment is in addition to the $10 million currently appropriated for preliminary engineering and design, which is already underway. The William Penn Foundation also announced that its board had approved $15 million toward the construction of the new park. In addition, WPF is committed to working with DRWC, the City and the Commonwealth to raise the remaining $10 million needed to complete the project funding and is confident that these funds will be secured in a timely fashion.

“The bold vision for the Delaware River Waterfront is now a reality,” said Janet Haas, board chair of the William Penn Foundation. “This vibrant connection to the city will forever change Philadelphia, and we thank the community for being so engaged in shaping the plan for this transformation.”

There are four key elements of this ambitious project, all of which were conceived as part of the Delaware River Waterfront Corporation’s Master Plan for the Central Delaware 2012 which included a detailed analysis and recommendation as to the most impactful and cost effective way to once again join Penn’s Landing back to the City.  This recommendation was thoroughly tested in 2014 through a thorough analysis and cost estimates by the internationally acclaimed landscape architectural firm of Hargreaves and Associates.  The four elements are as follows:

“This project is a once-in-a-generation economic development opportunity. It’s also long overdue. For decades, Philadelphia left millions in tax revenue on the table by not investing in its waterfront. We are behind the curve in comparison to other major cities who have all seen significant economic growth thanks to public investment in their waterfront properties. I thank the state, the William Penn Foundation and DRWC for coming together to make this possible,” Kenney said.

In addition to these public infrastructure elements, the project as currently contemplated will generate approximately $1.6 billion of new revenues within the overall waterfront district that will benefit the City, School District, and Commonwealth. The conservative, onsite development program for the six-acre Market Street parcel and the two-acre Marina Basin parcel envisions approximately 1,500 new housing units, 500 hotel rooms, and over 100,000 sq. ft. of retail, dining, and entertainment.  This investment will generate thousands of construction and hundreds of annualized jobs.

Design, permitting and construction documents will be completed by the end of 2019.  Construction of the project is estimated to take approximately three years.

“We applaud the vision and commitment of the Mayor, the Governor, the William Penn Foundation and all of those who worked to make this transformational project a reality.  We look forward to working with them to see it through completion,” said Tom Corcoran, president of DRWC.