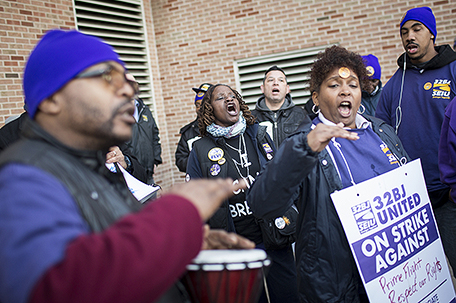 ABOVE PHOTO:  One of the minimum wage workers says the low pay is really limiting his chances at a decent life.  (Photograph by Matt Stanley Photo.)

HARRISBURG, PA. – One of the Philadelphia International Airport workers fighting for $12 an hour says his current minimum wage pay is keeping him from having a decent life.

Philadelphia’s mayor signed an executive order saying PHL workers should make $12 an hour, but some private contractors are still paying a lot less.

Hassan Benson has been a baggage handler for PrimeFlight for more than a year. The 21-year-old lives with his mother and sister, whom he helps to support.

“Pay us $7.25 as if we were high school kids with summer jobs, not realizing that some of us are grown with two to three kids,” he says. “I don’t understand.”

Several hundred of the contractors’ employees staged a symbolic one-day strike April 2. PrimeFlight has been largely silent on the issue, but another contractor announced plans to raise wages to the level set by the city.

The Service Employees International Union says it is bringing pressure through the city government and through the airlines that hire the contractors.

Last fall, after five of its employees received an award for good service, PrimeFlight released a statement saying how proud it was, stating, in part, “customer service is important in any business, but it takes on even greater significance at a major airport.”

“If we get the $12, it would just feel like the weight is lifted off of my shoulders because I could provide more,” he explains. “I know I would be at school knowing, ‘OK I’ve got enough money and I don’t have to worry about while I’m doing my work.’”

Benson says poor wages are part of the reason he hasn’t gotten married, moved into his own place and started a family. He’s studying allied health at a community college, but he says minimum wage is a real threat to those career plans.

“Being in school and working, it’s already hard enough,” he stresses. “It’s always so much on my mind I think about dropping out all the time. But I know I have a family to take care of, so I got to push myself.”