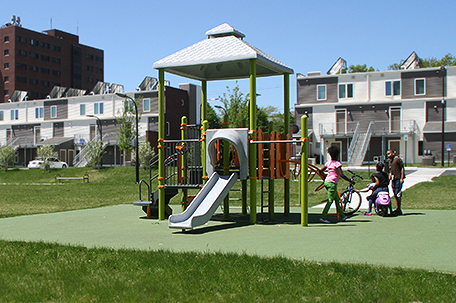 ABOVE PHOTO:  PHA’s LEED Gold Norris Apartments, located next to Temple University, have been recognized for outstanding achievement by the Mid-Atlantic Regional Council of the National Association of Housing and Redevelopment Officials (NAHRO).  The energy efficient design includes a small pocket park in the center courtyard that provides green space for residents while limiting rainwater runoff into the city sewer system.

Norris Apartments, located adjacent to Temple University’s main campus, is PHA’s first-ever LEED certified ‘development, and meets nationally accepted standards for planning, design, construction, and operation of high-performance green buildings. Energy savings for the apartment units are projected at 29 to 39 percent, while the townhomes are projected to save 38 to 45 percent, compared to conventionally-built units.

The density of the new development is much lower as well. PHA replaced 179 units, with 51 units in a mix of walkups and townhomes on the same block.  The design includes a small pocket park in the center courtyard that provides green space for residents while limiting rainwater runoff into the city sewer system.

“We are thrilled to receive this recognition from our peers,” said Kelvin Jeremiah, PHA President and CEO. “The housing authority has made a long-term commitment to sustainable development. Our design at Norris is in sync with Temple University and other private developers in the North-Central neighborhood, where, in partnership with the City and others, we hope to win a Choice Neighborhoods Implementation Grant to complete the transformation of the Norris neighborhood.”

Norris Apartments is also in line to win a national Award of Merit from NAHRO. The United States Green Building Council certified the new development as LEED Gold in February 2013. PHA used locally made materials as much as possible to reduce its carbon footprint. Besides saving energy, the goals for the new development included improved aesthetics, safety, health, and reducing stormwater runoff.

Norris Apartments is a transit-oriented development. It is near the Temple University Station, a hub for all of SEPTA’s regional rail lines. Residents also have easy access to the Broad Street subway and the 23 and C bus lines. Bus routes 4, 47, and 16 are just three to four blocks away.

The award-winning development is ideally located near a variety of educational services and the commercial corridor of Broad Street. The development complements ongoing public and private development in the neighborhood and has attracted positive attention from students and private citizens who have inquired as to whether they could live at the new development.