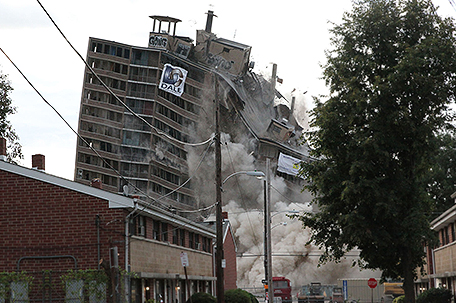 ABOVE PHOTO: The long-awaited implosion of the Queen Lane high-rise took place on Saturday, September 13. For over three years, local residents, community leaders and partners joined PHA to collaborate efforts to ensure the new development would not only provide housing for those in need but also spark economic growth within the neighborhood.  (Photo Credit: Philadelphia Housing Authority)

The Philadelphia Housing Authority (PHA) imploded the Queen Lane Apartments, a 16-story high-rise building in the historic Germantown neighborhood, on Saturday. The agency will replace the site with a 55-unit development that will be a mix of low-rise flats, walkups, and townhouses in character with the neighborhood.

The redevelopment of the Queen Lane site has been almost four years in the making. PHA’s initial development plans were announced in 2010 and were postponed after local residents raised concerns about a Potter’s Field, a historical burial ground dating back to the 1700s.

Consulting parties led by the U.S. Department of Housing and Urban Development (HUD), which included PHA, residents, and historical preservation agencies, collaborated to address the concerns.  After the completion of an archaeological dig and extensive community engagement, PHA signed a Programmatic Agreement with HUD, the State Historic Preservation Officer (SHPO), and the Advisory Council on Historic Preservation (ACHP) in February 2014. The agreement governs the way the site will be redeveloped in regards to the Potter’s Field, as identified through archaeological findings. To date, no human remains have been found on the site.

“We are relieved to conclude a long journey that began over three years ago and, as promised, affordable housing will return to this community. I know the new, modern affordable housing will enhance this neighborhood and spur other economic growth in this community,” said PHA President and CEO Kelvin A. Jeremiah. “I want to thank Councilwoman Cindy Bass and Queen Lane Resident Council President Corliss Gray for their steadfast support of this project from the very beginning.”

“This represents progress, but it’s also a time for us to remember and reflect upon the history of this community. PHA is investing in our neighborhood by committing to creating new opportunities for affordable housing in Germantown. I’m happy to see that after years of working together, this project is finally coming to fruition,” said Councilwoman Cindy Bass.

The agency formally began preparing neighborhood residents for the demolition with a series of four community meetings that began in early August. At the meetings, residents were able to speak with PHA, the City’s Office of Emergency Management, the Department of Licenses and Inspections, and Controlled Demolition Inc., the firm contracted to conduct the implosion. A special hotline number was also set up for residents.

Former residents of the high-rise began relocating in 2011. PHA paid for the cost of the move, the security deposit, and one month’s rent for residents moving to the Housing Choice Voucher (Section 8) program. The agency also reimbursed residents for reconnection of their telephone and cable TV service and provided a dislocation allowance of a hundred dollars.

With the demolition of Queen Lane, PHA will have eight high-rise sites remaining with 16 high-rises containing 1,880 units.