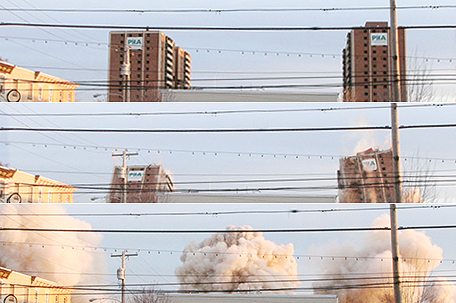 The Philadelphia Housing Authority (PHA) imploded two high-rises early this morning at the site of the Norman Blumberg Apartments in North Philadelphia as part of the Sharswood/Blumberg Transformation Plan.

“Our vision is to make Sharswood a neighborhood of choice where families can thrive,” said PHA President & CEO Kelvin A. Jeremiah.  “PHA and its partners are committed to building sustainable, energy efficient, affordable and market-rate housing while increasing facilities, services, and convenience for people across all income levels.  I’d like to thank Secretary Julian Castro and HUD, Mayor Jim Kenney, Council President Clarke, and all of the Sharswood/Blumberg Transformation Plan partners, especially the Sharswood/Blumberg residents for their steadfast and continued support of these efforts.”

“Today marks another milestone in PHA’s renewed promise to do better by its residents. I commend PHA’s CEO Kelvin Jeremiah and his team for leading this effort to transform not just the lives of PHA residents, but of an entire community,” Council President Clarke said.  “This plan cannot succeed without the cooperation and support of Sharswood’s residents, and I thank them for their input and patience.”

“Today is a great day for the Sharswood/Blumberg communities, the residents and the countless people who will benefit from the transformation that is fully underway in this neighborhood,” said Jane C.W. Vincent, Regional Administrator for HUD’s Mid-Atlantic region.  “Congratulations to all who have played a role in this monumental effort to making this truly a ‘Neighborhood of Choice.”

The plan has 10 phases and will yield over 1,200 total housing units, mixing rental and homeownership units at both affordable and market rates.  The restoration of the Ridge Avenue commercial corridor with businesses that will be anchored by PHA’s consolidated headquarters,is also a major component of the plan.

“The relocation of employees from several PHA offices into one consolidated headquarters will not only show the agency’s commitment to the Sharswood community but will also result in substantial savings in PHA’s operating costs,” CEO Jeremiah said.

Transformation of the community will take place over a period of several years, with the total investment estimated at over $500 million, with an economic impact of over $1 billion.

The Transformation Plan calls for reconnecting 23rd Street between Jefferson and Oxford Streets, eliminating the street-less superblock on which the site is built, and restoring the development’s integration in the neighborhood.  A second connector, Bucknell Street, will be added between 23rd and 24th Streets to improve the navigation neighborhood streetscape.

The plan represents an alignment of resources and partners across all levels of government: Federal, in the Choice Neighborhoods Implementation grant from HUD; State, in a Low Income Housing Tax Credit (LIHTC) award; and City, in both a HOME grant from the Office of Housing and Community Development (OHCD), and in support from the Office of the Mayor and from the City Council President.  The housing authority is also working with Public Health Management Corporation and Project HOME to provide health and wellness services to the community.

Last June, the Philadelphia City Council approved the agency’s plan to acquire nearly 1,300 parcels of land, comprising 800 private and 500 public parcels. The overwhelming majority of those parcels are vacant land or blighted structures.  This assemblage was critical to the successful completion of the transformation plan and to maintain affordability in the area. Approximately 70 properties in the neighborhood or 6 percent of all properties were occupied.

The Norman Blumberg Apartments in North Philadelphia dates back to the 1960s, and was first occupied in 1967.  The eight-acre site was extremely dense and contained 510 units in two 18-story towers, a 13-story senior citizen high-rise, and 15 low-rise buildings.  The senior high-rise will remain but will be rehabbed and modernize for seniors.  The now obsolete low-rise buildings will also be demolished.