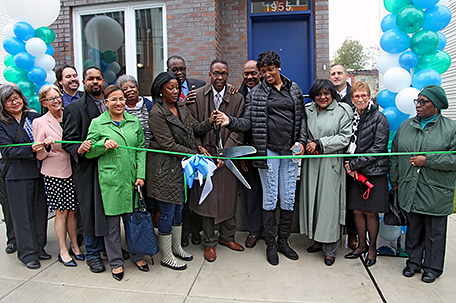 ABOVE PHOTO: PHA formally opened the Norris Apartments Phase II in the city’s North Central neighborhood. The 89-unit development represents the second of five phases to be developed under a $30 million Choice Neighborhoods Implementation grant.

Norris Phase II consists of 89 newly constructed rental units. It partially replaces an existing 147-unit low-rise development that dates back to late 1959 and early 1960 which has become obsolete. The development area is next to the Temple University Regional Rail Station and bounded by 9th Street on the West, Diamond Street to the North, Marshall Street to the East, and Berks Street to the South.

“We’re thrilled to see the renewal of this neighborhood as we work toward building a stronger, safer, more vibrant and sustainable community,” said PHA president and CEO Kelvin A. Jeremiah. “The Choice Neighborhoods Implementation grant that makes this and other redevelopment activities possible is one of the most significant investments in affordable housing by the federal government in recent years.”

PHA and the City of Philadelphia were awarded a $30 million Choice Neighborhoods Implementation Grant by HUD in June 2014 to revitalize the North Central neighborhood. A series of community meetings identified a number of resident priorities: more job training and opportunities; reduced crime and increased neighborhood safety; elimination of trash-strewn vacant land; and high-quality educational resources. The North Central Philadelphia transformation plan will address all of these areas of concern. 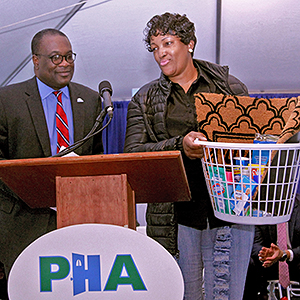 PHA president and CEO Kelvin Jeremiah presents a homecoming gift to Norris resident Barbara Harris, who is moving into one of the new units at Norris Phase II.

“Norris Phase II — and the Norris Development overall — is a great example of the kind of great outcome the City and PHA can accomplish together, especially when we listen to the community for what they think a choice neighborhood should include,” said Mayor Jim Kenney. “The wait has been long, but North Philadelphia residents can finally benefit from energy-efficient housing, near great transportation options and other amenities, in an attractive neighborhood teeming with potential. I thank all of the partners involved who put so much effort into this venture.”

“I’m pleased to see the City and our state and federal partners follow through on key commitments to affordability in one of the fastest-growing parts of Philadelphia,” Council President Darrell L. Clarke said. “We have demonstrative proof that earlier investments in this community are paying off, and that equitable, inclusive growth is possible. I want to thank PHA and all of our partners for continuing to leverage resources effectively in service to our residents.”

“One of the main reasons we are able to celebrate the grand opening of Norris Phase II is the $30 million grant awarded through HUD’s Choice Neighborhoods Program,” said Joe DeFelice, regional administrator of HUD’s Mid-Atlantic region. “Although the grant was awarded more than four years ago, its impact continues to be felt every day in the community. The ongoing development in North Central Philadelphia is creating a sense of renewed hope and opportunity while leveraging even more dollars through public-private partnerships. I’m proud we were able to make all of this possible.” 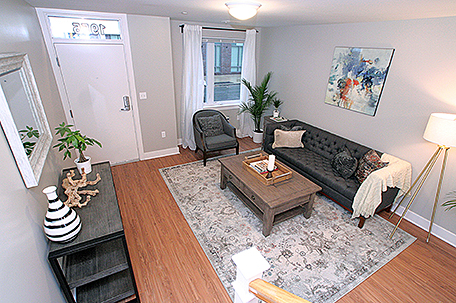 An overview of the living room at one of the 89 new rental units at Norris Phase II. The new development has high sustainability goals and will seek certification from LEED, Energy Star Homes, and Enterprise Green Communities.

“Today’s grand opening shows that the Department of Planning and Development’s coordinated approach is working,” said Anne Fadullon, director of planning and development for the City. “Project partners included not only PHA, DHCD and PRA, but also our Division of Development Services, which helped with the permitting process. Providing that kind of support for affordable housing is one of our goals, and we’re pleased we could play an important role here.”

To obtain the grant, the City worked with more than forty partners, including the School District of Philadelphia, Temple University, the Philadelphia Housing Authority (PHA), the Philadelphia Police Department, local leaders and community stakeholders through the Office of Community Housing and Development to create the resident-driven North Central Philadelphia transformation plan.

Norris Phase II complements ongoing private housing and commercial development in the neighborhood. The housing authority has invested $36 million to make the new homes a reality.

The new development has high sustainability goals and will seek certification from LEED, Energy Star Homes and Enterprise Green Communities. Ultimately, five phases of construction will take place in the North Central neighborhood over five years with the creation of 267 rental units and 30 homeownership units.