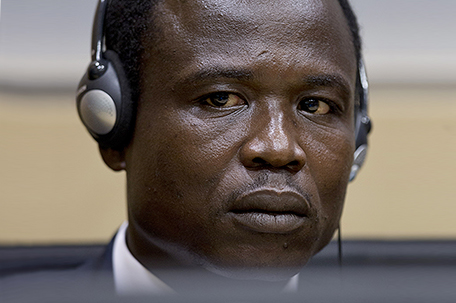 Dominic Ongwen, a Ugandan commander in warlord Joseph Kony’s feared militia, waits for the judge to arrive as he made his first appearance at the International Criminal Court in The Hague, Netherlands, Monday, Jan. 26, 2015. Ongwen arrived in The Hague last week after being taken into custody in Central African Republic. He faces war crimes and crimes against humanity charges for his alleged role in a reign of terror that has spanned more than 25 years in central Africa’s Great Lakes region. (AP Photo/Peter Dejong, Pool)