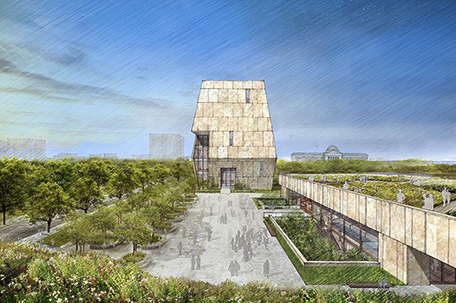 Former President Barack Obama and former First Lady Michelle Obama showed off a model of the Obama Presidential Center, which will honor the nation’s first African-American president as well as help to revitalize neighborhoods on Chicago South Side where the center will call home.

The $500 million, 200,000 square-foot center is scheduled to open in 2021 in Jackson Park, near Lake Michigan, according to Obama Foundation, which is raising money for the presidential center.  The Foundation said it will strengthen its neighborhoods’ economic climate by bringing thousands of visitors to Chicago every year, and creating new jobs on the South Side.

The foundation also hopes the center will revitalize historic Jackson Park.”We believe the center will restore the promise of Jackson Park as the people’s park, building on its history as a recreational destination for gathering on the South Side for families, community members and visitors,” the Obama Foundation said in a statement. 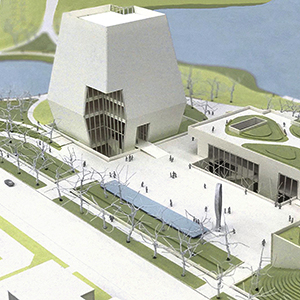 During a recent presentation at the South Shore Cultural Center, the Obamas said they are building the presidential center on the South Side to give back to the community which has given them so much.

The Obama Foundation is working with other institutions in the area, including the DuSable Museum of African-American History, the Museum of Science and Industry, the University of Chicago, and the City of Chicago.

The presidential center will consist of three buildings. The multi-story museum — the tallest structure on the site — will serve as a beacon for the Obama Center. The other two structures will be a library and a forum.

They will be one-story structures with landscaped roofs that offer views of Jackson Park Lagoon and Lake Michigan.

The campus will be open to the public, and the center will include indoor and outdoor spaces for events, trainings and other gatherings. The presidential center will have interactive displays to attract children and adults.

Tod Williams and Billie Tsien Architects have partnered with Interactive Design Architects to design the Center.