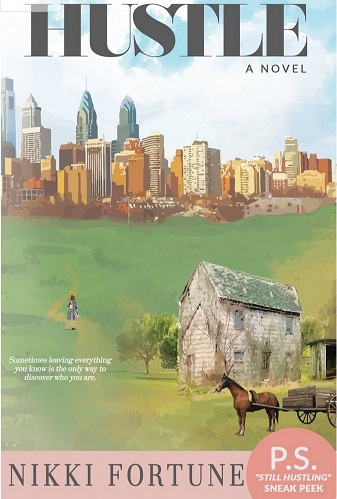 Fortune is the author of the novel, Hustle, inspired by the life of her late great-aunt Clara Johnson.

Hustle isn’t a nod to street culture but is actually a real town in Virginia where both Fortune’s great-aunt Clara and grandmother, Ernestine Jefferson, lived before migrating to Philadelphia for a better life.

“My Aunt Clara passed away last year at the age of 94.  She still lived alone, still had all her faculties and was financially independent. She was the matriarch of our family,” says Fortune who now resides in Long Island, New York.

Fortune, now 49-years-old, was a teenage mother herself.  One of her regrets for a long time was that she did not complete college.  She attended Morgan State University majoring in communications but ultimately had to focus on raising her child.

“I had my daughter when I was 19. I had to make some money.  That was the bottom line,” said Fortune who dropped out in her sophomore year.

“I got healed three years ago from not having a college degree,” said Fortune who lamented for many years that she did not graduate from the HBCU.

Although it was difficult being a teenage mother, Fortune realized that it was a blessing to add another generation to her family.

Fortune notes that many young daughters today don’t realize that they stand on the shoulders from the foundation the women in the family before them have laid.

“She [Aunt Clara] was so awesome, so resilient. She embodies a lot of what is missing in our community today. I wanted to highlight her so that her legacy will live on,” said Fortune.

Fortune now has two grown children–a twenty and a thirty-year-old.  She is also the grandmother to an 11-year-old.

Fortune, a beauty marketing executive, makes it clear that although the book is inspired by her aunt, it is fictional.

“It’s fiction based on fact.”

It took the author, who now lives in Long Island, NY,  ten months to publish the book. However, it was her friend Desi P. Shelton, who decided to write a play about the life of her Aunt Clara.

Shelton began writing the play for stage before reading the book. The theater production debuted in Philadelphia as a community show at the Independence Seaport Museum on Mother’s Day  to a sold-out audience. The show was followed by a Q&A session on how the production could be tweaked for it’s official Philadelphia run in September 2019.

Fortune gives advice to those who may be hesitant to dive into the waters of writing.

She encourages authors to go for it!

“Everyone has a story,” said Fortune.