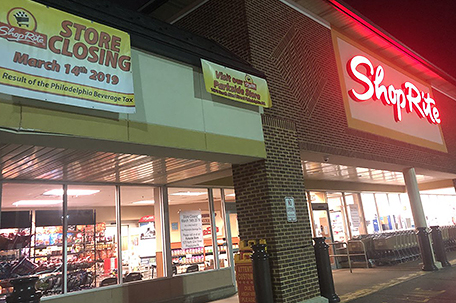 Residents voiced their concerns about the future of the 67th and Haverford ShopRite supermarket location at the first ever joint meeting of the Overbrook Park Civic Association (OPCA) president Mark Reason and Neighbors of Overbrook Association (NOAH) president Trina Brown. The store, a staple in the community for 30 years that has prevented the neighborhood from becoming a food desert, is scheduled to close in March.

Today’s shopper demands quality, good value and convenience, and has no problem with purchasing food and other staples from more than one location. Over two decades of fallout from welfare reform and a major recession have also had an impact of overall spending habits. Enter the controversial Philadelphia soda tax.

Jeff Brown — founder, president and CEO of Brown’s Super Stores, Inc. — cites the tax as the central reason for his decision to close the Overbrook ShopRite.

The closure will only leave an Aldi supermarket located about one mile away on 76th Street as the only nearby alternative. Residents are not happy.

“The neighbors like Aldi, but ShopRite is what they are used to – a full service supermarket,” Reason said.

“This community matters to us, just so you know that,” Brown said as he addressed the packed meeting room. “Whether there’s a store there all the time, or whether there is a period of time where there’s no store, the community still matters to us.”

Brown provided an overview of his well-known oppositional stance to Philadelphia’s soda tax. He also cited a two-year study entitled “The Impact of Soda Taxes: Pass-through, Tax Avoidance, and Nutritional Eﬀects” compiled by Northwestern University, Stanford University and the University of Minnesota that concluded while that soda taxes adversely affected retailers, they did not alter health-related outcomes or reduce soda or juice consumption.

Brown’s said that his Philadelphia stores are struggling to stay afloat. Others — including his Cheltenham ShopRite location — are enjoying a “windfall” due to being located just over the county line, literally across the street from a major Philadelphia business district and several low-income and middle neighborhood communities.

The Haverford Avenue location — which posted a 23 percent drop in revenue Brown attributes largely to the soda tax — is the first store he has decided to close, although he admits that it was a difficult decision to make after many months of trying to find ways to turn things around.

“We have two others that have massive losses [that are] jeopardizing the existence of our company,” Brown said. “With nobody really interested in this problem, we felt we had to solve the problem on our own.”

In addition to the soda tax impact and general changes in shopping habits, the physical challenges of the Haverford Avenue location, especially as it relates to expansion, were another negative factor Brown was up against as he contemplated lease renewal. Obstacles to expanding the market to the 65k square footage required for a viable modern supermarket include a gas line that would need to be moved at the owner’s expense and that would require the use of adjoining Fairmount Park property, a process fraught with its own set of regulatory headaches. An alternative solution — expanding upwards by adding another floor to the building — requires cart elevators, is a model that is not particularly popular with shoppers and is costly.

Representatives from new building owners, Sant Properties — who purchased the property with full knowledge of its many challenges — told the neighbors that although they are still open to having Brown’s ShopRite or similar business remain in some capacity if something can be worked out, they have enlisted the help of a national broker who is tasked with finding a new tenant. Currently the location is zoned for supermarket use only and will be subject to a rigorous rezoning process should they decide to pursue other options.

According to an article posted on Philly.com in January, Ravinder Chawla of Sant Properties indicated that some of the businesses which have expressed interest are dollar stores, gyms, and coin laundries – businesses residents and their representatives have expressly indicted that they do not want. This includes anything less than a full service supermarket.

“We are looking for viable options that do not include dollar stores,” Councilman Curtis Jones, Jr. (D-Dist. 4) told the residents. “That would be D.O.A. – dead on arrival. You deserve fresh groceries. You deserve vegetables. You deserve healthy choices, and whatever we have to do to try to bring that, either by keeping Brown’s [ShopRite] or moving on and finding someone who is acceptable to you. They have to come before you, just like this, if it is not Jeff.”

Jones is working to resolve the issues surrounding the property and other Philadelphia businesses going forward.

“We’re looking at another formula that might bring in revenue,” Jones said. “You cannot reduce revenue and reduce taxes to solve the city’s problems, so we’re looking at different options…we have met with the mayor, we met with PIDC (Philadelphia Industrial Development Corporation), the Commerce Department and the Redevelopment Authority to give us some of those options.”

State Rep. Morgan Cephas (D-192nd Dist.), restated her commitment to the community, which as a middle neighborhood — a neighborhood that is either on the cusp of growth or decline — needs to be paid attention to.

“One of the things I will be doing at the state level working with our senator (State Sen. Vincent Hughes) to find the resources that it will take to get Jeff Brown to stay, but if we do happen to get a new and different owner, to provide them with the financial resources that they need in order for this business to thrive,” she said.

Many neighbors present expressed that they understand businesses often have to make tough choices. However, they were less than pleased with how the whole sale process has unfolded, especially where it concerned transparency and shared information. Others wanted to know about the level of commitment the new owners had to a full service market in that location, given its particular challenges.

One attendee pointed out the long term health benefits and lifestyle changes resulting from the tobacco tax, and how the soda tax could follow a similar trajectory, providing more benefits than drawbacks. Similarly, Jones, although he is open to alternative funding solutions, said that his grandchildren and thousands of others are benefitting from the preschool program the tax funds. He is also committed to the recreation center improvements that are being funded through the tax.

Interim plans to help residents includes a Lyft rideshare program where former Haverford Avenue shoppers can sign up at the current location until it closes for rides to and from Brown’s ShopRite of Parkside Grocery store located at 1575 N. 52nd Street. The program is scheduled to run through the end of the year.

Future meetings regarding the location are planned in the coming weeks. Brown, along with the elected officials present, the new owners, the community association’s respective leadership and residents renewed their commitment to stay on top of the situation. No matter what the eventual outcome is, what was painfully obvious by the end of the spirited meeting was that anything less than some sort of full service, quality supermarket — with or without soda as a main feature — was going to have to be part of the solution.

“They don’t need any other type of retail there; they need a market,” Liggins- McCoy said.