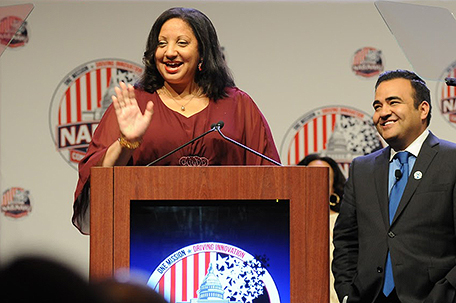 Success due to fiscal management, member and partner support

COLLEGE PARK, MD.–The National Association of Black Journalists (NABJ) is set to end the year with a projected $1 million surplus – one of the highest in the organization’s 41-year history.

NABJ President Sarah Glover announced the historic news during the fall board meeting on Sunday. The unaudited amount represents a half million dollars more than what NABJ reported as the expected 2016 surplus during its national convention in August. The projected surplus is a result of disciplined fiscal management and a surge in convention registrations — 3,209 NABJ registrants for the 2016 NABJ/NAHJ Convention, which had a total of 3,890 attendees.

“I am very proud of the strong business practices NABJ put in place at the beginning of the year. Those efforts contributed to a projected million dollar-plus surplus for 2016. NABJ will meet my goal of no deficit in 2016,” Glover said. “I’m thankful for our partners and members who stepped up in a major way and helped us reach this historic milestone by supporting the 2016 NABJ/NAHJ Convention and other NABJ programs. We could not have achieved these results without the NABJ family.

The organization’s current leadership inherited a significant deficit, prompting far-reaching media headlines that questioned the organization’s viability. The reports of the association’s demise were highly exaggerated. Not only is NABJ now in the black, it’s in a strong position to improve its savings and investments, operations, programs and partner relationships.

While the organization has had a multi-million dollar revenue stream before, this is the first time in the organization’s history it will end the fiscal year with a surplus of more than a million dollars, according to NABJ Treasurer Greg Morrison and NABJ Finance Manager Nathaniel Chambers.

“The NABJ Finance Committee, under the leadership of chairman Greg Lee, took a hard look at our fiscal governance model and made some thoughtful recommendations to the president, executive director, and board. Those recommendations were approved and put into practice,” Morrison said. “We are very pleased with this outcome.”

“NABJ will continue zero-based budgeting and sound fiscal practices so the organization may continue to be in a healthy financial position in 2017 and beyond,” Glover said.

About the National Association of Black Journalists:

An advocacy group established in 1975 in Washington, D.C., NABJ is the largest organization for journalists of color in the nation, and provides career development as well as educational and other support to its members worldwide.