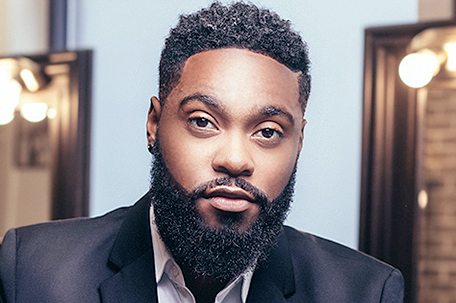 Wade Menendez, also known as “Wade the Barber,” has been credited for transforming the hair game as a pioneer of creating “man weaves.” Those who have a balding scalp run to his Maryland-based barbershop called The W Hair Loft, and it’s no surprise that his unique procedure has earned him almost $500,000 in one year!

Menendez, a 35-year old African-American man, has been highly acclaimed as an innovator in the field of hair styling. He developed the cranial prosthesis, most commonly known as a “man weave,” which fills a balding scalp with hair — without the need for a surgery!

With the help of another stylist, Menendez developed a simple procedure to install hair to balding scalp. He glues natural and synthetic hair pieces to the scalp and blends it to the remaining natural hair.

For over 13 years, he has been in the barber field making impressive cuts to his wide range of clientele. In 2011, he opened his first barbershop in Glen Burnie, Maryland where numerous services are offered. And just four years ago, he added creating man weaves into his portfolio.

Aside from being a hairstylist, Menendez also hosts classes where he teaches over 500 hair professionals how to do what he does. Last October, his class gathered stylists and barbers from different areas around the world, including London.

“There’s a big demand for [hair units] in the U.K.,” Steve Diligence, who flew from London to Maryland to learn from Menendez firsthand, told Vice News. “People have seen videos from the states, and they say it’s impossible or magic.”

Hair weaves or extensions have been a lucrative market, especially for Black women. A market research reports that “nearly six out of 10 Black consumers wear a wig, weave or extensions, which enables them to switch up their look.”

Menendez has definitely had the advantage because of that market. Last year, he earned more than $400,000 through his business alone. He revealed that he also got a few celebrities among his clients. But he says his achievements aren’t only measured by his profits.

“I’m doing this to help other people – and that’s not just with that confidence but helping other people even make money,” Menendez said. “I’m always here to do whatever I can, and I feel like that’s what I’m called on to do, so I’m operating in my purpose and my destiny.”

For more information about Wade Menendez and The W Hair Loft, visit www.wadethebarber.com

To some, hair weaves do have benefits