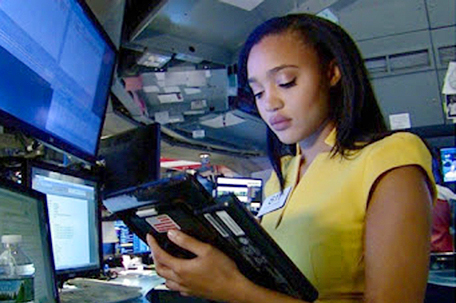 Simmons — the youngest and the only full-time female and African-American trader on floor of the New York Stock Exchange – reflected on her experiences at the Pyramid Club in Center City recently.

A love for numbers and devotion to a brother with cerebral palsy informed Lauren Simmons’ course of study at Kennesaw State University in Georgia; a major in genetic counseling with a minor in statistics.

Although she eventually graduated with a degree in genetic counseling in December 2016, it did not take long for her to decide that it wasn’t the career for her. Statistics turned out to be what interested her most, so she decided to pursue related opportunities in New York City.

It was a leap of faith. Confronted with the magnitude of challenges in one of the world’s most competitive cities, Simmons, 23, was admittedly frustrated with what she felt was a disadvantage — her humble Georgia background — and took it out on her family. However, she soon discovered that true success is not necessarily contingent upon place of origin, existing connections or perceived weaknesses, but comes about only through risk-taking, a strong sense of self-awareness and an open mind. She adjusted her attitude and focus, and began to educate herself through self-help books and networking.

While working at Saks Fifth Avenue as a sales manager, Simmons reached out to fellow KSU alumni members in the city who helped her procure an interview with Rosenblatt Securities. When she was turned down for that initial job, she was offered an opportunity to apply for a job as a full-time equity trader at the New York Stock Exchange.

Intrigued, Simmons interviewed for the position and was hired. Part of this process included passing a difficult qualifying exam called Series 19, which has an 80 percent failure rate. Although the financial services industry upon which the exam is based was not her area of expertise, she buckled down for a month and studied hard.

Simmons aced it, and continues to explore the myriad of possibilities that this unique opportunity has presented to her. An unlikely candidate at first, she was well aware of her nontraditional career choice. In a BBC interview, she recalled the initial reaction she received.

“A woman, and you’re 23, and a minority – what are you doing?’” she remembered being asked.

Simmons is the only the second African-American woman to sign the vaunted NYSE book containing the organization’s constitution and the signature of John D. Rockefeller, a coveted achievement by many in the financial sector. The first — Martina Edwards, who went on to become vice president of Merrill Lynch — is not only an inspiration to Simmons, but has become one of her greatest mentors.

She spoke to an enthusiastic crowd at an event dubbed “The Power of Personality: With Lauren Simmons” recently at the Pyramid Club in Center City. The event — sponsored by the African American Chamber of Commerce of Philadelphia and Modern Wealth Concepts Executive Services Group — featured a discussion and Q&A session that focused on the importance of self-determination and the ways mind over matter can help when managing demanding situations.

Simmons hasn’t let the pressures of being in an mostly male, predominately White environment and the stereotypes that go with it hinder her in any way. Her greatest strength, and the one that has helped her gain the respect of colleagues and clients, has been her ability to be unapologetically authentic, intelligent, and self-aware. 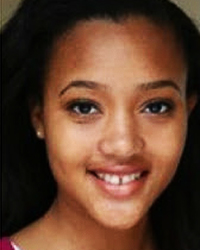 As a native of Atlanta, Simmons realized that although she was self- confident, she would have to learn how to project her customarily soft Southern voice in order to establish her authority on trading floor.

“It’s essential to any community – having that diversity,” she said. “For me to be a representation of women on the floor is good for discussion…it helps them [her affluent mostly White male colleagues] change their mindset for the better.”

Simmons told the audience — especially women, who tend to give in too easily to self-doubt — that those who want to pursue or follow a nontraditional or upwardly mobile career path should not allow fear, lack of experience or other perceived obstacles to deter them.

“For example, there is a woman and the job description says 10 years of experience [required]; she’s worked 9 ½ years,” she said. “Then there’s a White male who has worked three years who says, ‘I’m going to apply for this job – I don’t care… the lady with the 9 ½ years of experience says, ‘oh, I shouldn’t apply, because I don’t have 10 years’ experience’ when clearly, she’s qualified. [However] qualified or not, if you have something in mind, go for it.”

Simmons embodies the emerging millennial philosophy of self-determination and a willingness to accept risk. Millennials have also come of age in a time where a change of career direction is likely to occur every few years. As a result, they have leveraged that reality to their advantage by remaining flexible and through openness to new opportunities.

Although she refuses to predict how long she will stay in her current position or to articulate any long-term fixed goals, she’s enjoying the experience, and encouraged the attendees to be bold and relentless.

Don’t underestimate the power of your LinkedIn account, networking events, and remain persistent regardless of rejection, Simmons said told the audience.

Modern Wealth Concepts focuses on leadership development and career advancement for professionals looking to achieve the next level. For more information, call (215) 782-1877 or visit: http://www.modernwealthconcepts.com.

The African-American Chamber of Commerce of PA, NJ, and DE is a membership organization that serves businesses in the public, private and independent sector who are committed to supporting the economic empowerment and growth of African-American businesses located in Southeastern Pennsylvania, Southern New Jersey and Northern Delaware. For more information, call (215) 751- 9501, or visit: https://aachamber.com.