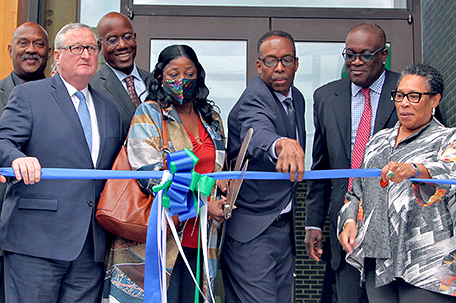 Sparked by a $30 million Choice Neighborhoods Implementation Grant from the U.S. Department of Housing and Urban Development (HUD), the Philadelphia Housing Authority (PHA) and the City of Philadelphia today celebrated the completion of North Central, a neighborhood revitalized and designed for, by and with the community.

The vision for North Central emerged from recommendations from residents, partners, and stakeholders who sought a more inclusive, resident-centric approach to housing and economic development. It sits upon the former site of the 1950s-era Norris Homes apartments, public housing that had been walled off and hidden from the nearby community. The former Norris public housing site was demolished in two phases – one in March 2018, and the second in Feb. 2019 – to make way for the redevelopment.

In stark contrast, new North Central brings together residents of various income levels to forge a vision that meets the needs of all who live there. The North Central Choice Transformation plan expands the range and quality of mixed-income, energy-efficient housing options; develops publicly-owned vacant parcels that had been a hazard and eyesore; and preserves and protects affordable housing units for long-time neighborhood residents.

“PHA and our many partners, including the City of Philadelphia, have built an inclusive, stronger, safer, more vibrant, and sustainable community,” said PHA President and CEO Kelvin A. Jeremiah. “North Central is forging common ground by bridging the gap between PHA residents and those living in private housing. The Choice Neighborhoods Implementation Grant that made this, and other redevelopment activities possible, is one of the most significant investments in affordable housing by the federal government in recent years. I want to thank HUD Secretary Marcia Fudge, Mayor Jim Kenney, City Council President Clarke, and Temple University for their steadfast support, and I especially want to thank Donna Richardson and all the residents that were patient and engaged throughout this long process.”

“I applaud the Philadelphia Housing Authority, the City of Philadelphia, and its partners for the vision and execution of the North Central Choice Implementation Plan,” said U.S. Housing and Urban Development Secretary Marcia L. Fudge. “HUD is pleased to serve as a partner to not only ensure the preservation of affordable housing in this community, but to also support new investments and opportunities for residents. This transformation is an example of federal, state, and local partners working together to deliver for the families we serve.”

“This development reflects our city’s commitment to creating inclusive communities that preserve and ensure housing affordability for long-time residents,” said Mayor Jim Kenney. “Not only did we eliminate antiquated public housing, but we also replaced it with more than double the number of units, giving residents access to all the amenities and opportunities this neighborhood offers. I congratulate all the partners who collaborated to make today a reality, especially Kelvin Jeremiah and the Philadelphia Housing Authority for his focus and mission on bringing new benefits to this community.”

“This is an important day for North Philadelphia,” said Council President Darrell L. Clarke, whose 5th district includes the North Central development. “And it’s a very good example of the strong collaboration between the federal government, the Philadelphia Housing Authority. City Council and the Kenney administration, in building affordable housing that makes sense for the people of our community. Everyone has the right to live in a good, decent, attractive, affordable home – and North Central delivers on every one of those attributes.”

To obtain the grant, the PHA and the City worked with more than 40 partners, including the School District of Philadelphia, Temple University, the Philadelphia Police Department, local leaders, and community stakeholders through the Office of Community Housing and Development, to create the resident-driven North Central Philadelphia transformation plan. Private developers such as Jonathan Rose Companies and Frankel Enterprises played a crucial role as development partners.