Homeless haircuts: Salvation of Sorrows boosting pride and dignity, one head at a time 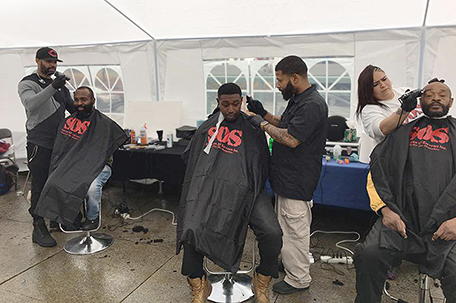 The Salvation of Sorrows nonprofit is vying to give 700 haircuts to the homeless by Sunday, Feb. 19. The group’s founder, Abby Anderson of Northeast Philadelphia, believes it is attainable since after their first several months they were able to close out 2006 with 500 haircut and grooming sessions. Yet the nonprofit is taking three major steps to insure that they will be able to assist the homeless even more.

First, Anderson officially applied for a trademark for Salvation of Sorrows. This step was taken after an overzealous man with some barbering skills set up informal shop in downtown Philadelphia calling his one-man operation by her nonprofit’s name. So, to avert any future confusion Anderson is formalizing the name and its SOS acronym.

“We are almost at our goal of having a truck,” Anderson said. “As we move forward we will not only be able to give the men a haircut and shave, but they will be able to shower afterwards. So, little by little we are closer to getting this paratransit mobile bus with a showering unit.”

Next, Anderson still has the dream of setting a precedent of having a barbershop in every homeless shelter. It could be open once or twice a week or even every other week. Though she does not have all the logistics finalized yet she does know that the first one will be dedicated to the memory of her own father.

Anderson has started Salvation of Sorrows as a tribute to her late father, who served in the U.S. Marines Corp. Her father was one of the many African-American soldiers who returned home, only to find that he needed help to overcome mental health issues as well as needing a permanent place to lay his head at night. So, when he passed away among the homeless veterans, Anderson said she soon realized that God wanted her to help those like her father.

Yet, Anderson was not in a position to provide housing, so she did the next best thing. She remembered how meticulous her father was about his grooming. He was the kind of man who prided himself in looking polished whether going to church or work. 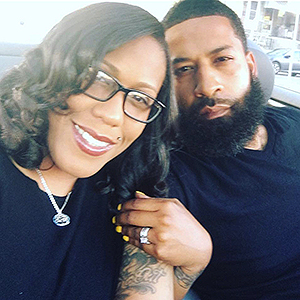 One of the things that brought his spirits down about being homeless was his unkempt appearance. Anderson knew this one thing prevents many men from going on job interviews.

So, she set up Salvation of Sorrows. Through this Anderson gathers together volunteers from all walks of life, different faiths, or anyone who wants to lend a hand. Among her most faithful volunteers has been her husband, Chris, who had never given a haircut before this venture. She also has professional barbers who volunteer as well as ordinary citizens who want to help. Anderson, herself, often does many of the haircuts and shaves.

“For many men, like my father, a haircut was one way of bringing back dignity,” Anderson said. “So, after my father passed in 2014, I asked myself a question. After praying on it, it came to me to get some barbers and take them to the shelters where the homeless men were to give their haircuts. I also reached out to the Philadelphia Barber’s School.

“My number one volunteer turned out to be my husband. We’ve been married six years. I asked him for help on a day I needed it. He hesitated, but then said yes because one of the barbers was a no show. He now has a passion for doing haircuts,” Anderson said.

One thing that is unique about this volunteer effort is its “pop-up” mobility. Salvation of Sorrows has been known to literally set up a tent in a church yard, in an empty lot near a homeless shelter or convert a community room into an instant barber shop. At one point, she also enlisted entrepreneurs who donated caps to her Hats for the Homeless initiative.

Among those who have helped Salvation of Sorrows become a viable ministry is Miguel Olmeda, who serves as chairman of the board. He was previously involved in Haircuts for Hope, a group that also gave out haircuts. Yet they had a different twist, because often the volunteer barbers were actually homeless barbers. Now, Olmeda is planning to integrate this concept into the Salvation of Sorrows efforts in 2017.

“I know Abby is excited about being mobile and I think that can work,” said Olmeda, who has worked with the In the Light Ministries, City Reach in the Northeast, and St. Mark’s Church in Frankford. “I also want us to look towards creating permanent barber shops at some of the homeless places.

I see the mobile side as a temporary Band-Aid that can be continued. But it is (contingent) on the weather and other factors. If you have a stationery barbershop at shelters or other locations then those there can get haircuts more often. Some volunteers can go there on regular schedules or those who know have worked as barbers before can do the haircuts and shaves, which will keep their skills up. Maybe they can then get a job that could lead them out of being homeless,” Olmeda said.

Chris Anderson is completely supportive of his wife’s efforts. He said that even after he had an injury last year it was not long before he was back in the trenches assisting his wife and the other volunteers. “This is a positive thing and I enjoy giving the haircuts,” he said.