Guest Commentary: The government shutdown and the collateral damage 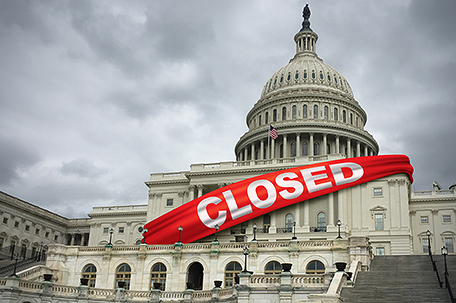 As I write this, our federal government has been shut down for 27 days.  At first, it seemed like a gamesmanship joke, like who was going to blink first.  House Speaker Nancy Pelosi and (CA) Senate Minority Leader Chuck Schumer (NY) didn’t look like they were blinking when 45 said he would “own” the shutdown to get his wall.  He’s not owning it now – he didn’t go to Mar-a-Largo to golf, and he indicated how acutely he felt the shutdown by serving Clemson football players cold fast food.

Furloughed federal workers will be paid, thanks to legislation 45 signed on January 16.  The fact that people will get paid when the shutdown is over (which 45 says may take “months” or “years”) is reassuring, but it helps few with their day-to-day obligations.   A 2018 study from the Federal Reserve Bank says that 40 percent of all Americans can’t absorb a $400 emergency without going into (further) debt, borrowing or selling something to meet a minor expense like a faulty car engine, a busted heating system, an emergency room copay, or some other ordinary challenge.  So for many, delaying even one paycheck is likely to cause a seismic shock in family finances.

Many will piece it together, but they may miss credit card, mortgage, rent or other payments.  In a month or so they’ll be caught up, but what about their credit rating?  Catching up may mean getting current on bills, but it does not mean overcoming the ding that will inevitably appear on one’s credit score.  It may take months, even years, for some to transcend that, especially if their credit was shaky to begin with.

Four in five Americans live in debt, mostly because of mortgages and student loans ($1.5 trillion total) that strangle people’s ability to live in financial freedom.  While mortgage and student loan debts are the most significant contributions to our nation’s debt crisis, medical debt is the most frequently cited cause for personal bankruptcy in our country.  The fact that so many have medical debt reflects the crisis in our national health care system.

Bottom line – the shutdown not only affects people’s ability to manage their day to day finances but will also affect their long-term credit score and have consequences for those at the margins.  From the data on emergencies, nearly half of all Americans are living at the margins.  These are the folks who Trump and his minions say should “make arrangements” during the shutdown.  They should, some say, have contingency plans.  What is your contingency when you live paycheck to paycheck?

Furloughed workers will get back pay and, though impaired, will manage.  What about those who work for government contractors.  Nobody has their back.  Many are high-rolling, highly-paid contractors who will take a hit but won’t be knocked out.  Then, there are the women of color (mostly) who clean federal office buildings at night.  They won’t get back pay. They won’t be compensated for their services.  They will take it in the shins, and taking it means managing to live without pay for weeks.  Even those who are sensitive to the economic impact of this shutdown have not spoken up for the contract workers who have been disadvantaged.

A government shutdown also means a benefit shutdown for people who receive government benefits – food or housing assistance, or more.  While many are optimistic that things will be adjusted, the fact is that people’s expectations are not being met and people are scrambling!  The scrambling is not restricted to any race, to any party.  The man who calls himself President seems to be under the mistaken impression that most government workers are Democrats.  The fact, according to the Government Business Council, is that there is a pretty even split, with 44 percent of government workers being identified as Democrats or Democratic-leaning, 40 percent identified as Republican or Republican-leaning, and the remainder undecided, with a significant number of these identifying themselves as “conservative.” All of these government workers are collateral damage, thanks to 45!

Our entire social and economic fabric is frayed thanks to this petulant government shutdown.  Democrats, Republicans, and everyone else will pay for this thoughtless absurd public tantrum.  This shutdown is aothingr more than a disturbing public outburst.  Where do we go from here?