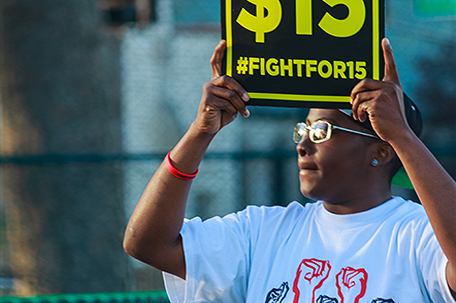 ABOVE PHOTO: A unknown person holding a sign for the raise of minimum wage at a site at protest. (The Bohemian Lens / Shutterstock)

I’m a small business owner, and I strongly support raising the minimum wage to $15. Paying employees wages they can live on is good business.

I own La Barberia, a full-service barbershop with locations in Philadelphia and Jenkintown. I know that if my employees aren’t happy, my customers won’t be happy.

It’s very important for us to have a stable staff without a lot of turnover. Customers count on seeing “their barber” when they come in. We don’t want barbers leaving to make 50 cents or $1 an hour more elsewhere.

The Pennsylvania and federal minimum wage of $7.25 an hour comes to $15,000 a year for full-time work. I can’t imagine paying anyone $7.25 an hour. It would send the message to employees that I don’t care about you – or our customers.

At La Barberia, employees are our most important asset. We pay a decent salary that respects the craftsmanship and work ethic of our staff. Many of our employees have been with us for years – some for 40 years.

Some small business owners might call me lucky. But I call it smart business.

Employee turnover is disruptive, expensive and inefficient. Constantly hiring and training new staff slows down your business and costs time and money. It undercuts customer service.

With better pay, our employees stay with us, providing the great service that keeps our customers coming back and recommending us to others.

When the minimum wage goes up, businesses will see costly turnover go down.

Raising the minimum wage will also put more money in the pockets of local people, who spend it at local businesses like mine.

As I like to say, you can’t spend it if you don’t have it. If you work full-time and can’t afford basic necessities like food and rent, you’re probably going to skip your haircut.

I support legislation being debated in Congress that would incrementally raise the federal minimum wage to $15 by 2025. In fact, I’m one of hundreds of business owners in Pennsylvania and across the country who has signed a Business for a Fair Minimum Wage statement supporting an increase to $15.

The minimum wage has been stuck at $7.25 since 2009 – the longest period without a raise since the minimum wage was first enacted to help workers, businesses and the economy recover from the Great Depression.

Pennsylvania’s neighbors all have minimum wages higher than $7.25. Maryland, New Jersey and New York are on their way to a $15 minimum wage already.

Before the pandemic hit, the Federal Reserve Bank of New York compared counties along both sides of the New York-Pennsylvania border to see the impact of New York raising its minimum wage while Pennsylvania stayed stuck at $7.25. They looked at two industries with many lower-wage workers: retail trade and leisure & hospitality.

Contrary to what opponents of raising the minimum wage claim would happen, they found that wages went up in New York without negative effects on employment compared to Pennsylvania.

Raising the minimum wage will increase wages for many essential workers who aren’t paid enough to cover their essentials. It will boost the customer spending we need at businesses like mine.

Raising the minimum wage will help us recover from the pandemic and strengthen our economy and our Commonwealth.

Michael O’Connor is the co-owner of La Barberia, with locations in Philadelphia and Jenkintown, and a member of Business for a Fair Minimum Wage. This article previously appeared in the Philadelphia Inquirer.