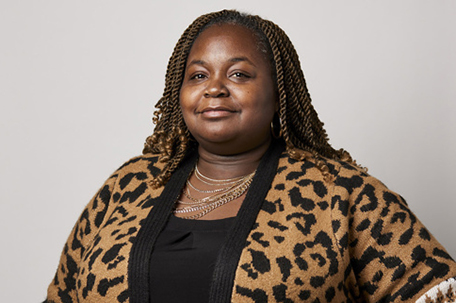 Beasley adds management expertise to the College’s leadership team with a history of success in organizational strategy for mission-driven nonprofits and schools.

Girard College announces the appointment of strategic planner and community advocate Latesha D. Beasley, MPA, SHRM-CP as Vice President of Girard College Operations, effective January 9. Beasley has deep roots in the nonprofit and educational sectors, most recently serving as Chief of Staff at community development organization North 10 Philadelphia. She will be charged with leading all administrative, operational, facilities, and human resources functions at Girard while partnering with the President on organizational strategy.

“Latesha is a proven leader with a strong track record of managing people and systems to optimize operations and achieve strategic priorities,” says F. Christopher Goins, President of Girard College. “I am inspired by her commitment to equity and social justice, and I look forward to partnering with her in bringing the College’s bold vision for our students to life.”

While at North 10 Philadelphia, a neighborhood revitalization organization that aims to improve the lives of individuals in the Hunting Park and East Tioga neighborhoods of North Philadelphia, Beasley oversaw the strategic direction of the organization and developed the planning process for partnering with community leaders and local officials. She developed policies, built professional culture, and supervised a team of facilities and operations staff in a time of transition. She also served as the Senior Director of Operations and Special Projects for the Lenfest Center, which is proudly operated by North 10.

Beasley has devoted her personal and professional life to increasing opportunities for youth and individuals in under-served communities, and immediately saw the potential to make a significant impact at Girard College.

“Girard College has shown itself to be a leader in advancing educational equity for students like me,” says Beasley. “I am humbled to be able to serve this community as we embark on a new era of excellence.”

Prior to North 10, Beasley served as Manager of Recruiting and Staffing for the Camden City School District, where she supported family school staffing, diversity initiatives, and compensation research to position the District as a competitive employer and national model for urban education. Latesha also worked as the District’s Innovation Manager, where she served as a liaison to New Jersey’s only Renaissance (District-Charter hybrid) school. In this role, she supported the District with multimillion-dollar construction projects and operationalized major District initiatives, such as a city-wide enrollment process.

As a champion for children, Latesha also served as Interim Executive Director for Court Appointed Special Advocates (CASA) of Camden County, where she was responsible for increasing the visibility of the program to ensure its sustainability. Under her leadership, the program grew its educational advocacy initiative to advocate for abused, neglected children in out-of-home placement and increased the percentage of young people who would receive a CASA volunteer.

Beasley holds a master’s degree in public administration from Villanova University and a bachelor’s degree in political science from Rutgers University–New Brunswick. She lives in New Jersey with her husband Mylan and her curious and active daughter Myla Grace.