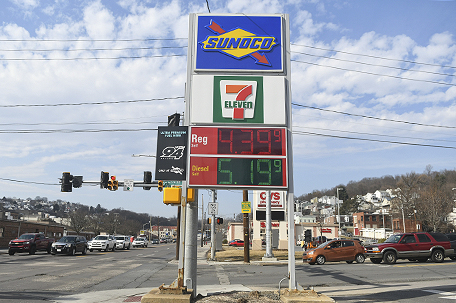 Gas prices in New Jersey and Pennsylvania hit all-time highs over the past weekend amid tight worldwide oil supplies and increased demand as the industry feels the effects of the Russian invasion of Ukraine, analysts said.

Across the nation, the average retail price for a gallon of regular, self-service gasoline topped $4.00 per gallon last Sunday for the first time since July 25, 2008, up 40 cents in the past week and $1.24 higher than one year ago, AAA said.

Tracy E. Noble, manager of public and government affairs for AAA Mid-Atlantic, noted earlier that motorists are feeling “the pain at the pump” while still months away from the start of the peak summer driving season, and signs point to higher crude oil and gasoline prices for the remainder of winter and into spring.

Gas prices surpass $3.00 per gallon for 1,000 consecutive days in longest streak ever