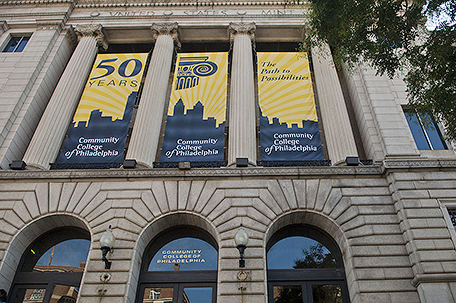 May 1, 2015 Category: Color Of Money Posted by: Philadelphia Sun Staff

All Philadelphia high school students graduating in 2015 may be able to pursue an associate’s degree at Community College of Philadelphia with no cost for tuition and fees.

The 50th Anniversary Scholars Program is open to all Philadelphia high school students who graduate in 2015 and meet the following requirements:

• Enroll full time (at least 12 credits, up to 15 credits) for each semester

• Enroll in a degree program of study

Students need only submit the Free Application for Federal Student Aid (FAFSA), an application of federal and state financial aid, at www.fafsa.ed.gov. If they meet the eligibility requirements, the College will cover all remaining tuition and fees for up to three years (excluding summers) or until the completion of an associate’s degree, whichever comes first.

“The College was founded during an era of expanding opportunity,” said President Donald Guy Generals. “The Civil Rights Act was passed in 1964, and the Voting Rights Act was signed into law just about a month before our college opened its doors.  Fifty years later, the Community College of Philadelphia Foundation Board, which is committed to raising funds to support the scholarships, is expanding opportunity in a meaningful way for a new generation of Philadelphians.”

“Members of the Community College of Philadelphia Foundation Board so often are inspired by the determined students we meet and the success stories we hear every year,” said Arlene Yocum, president of the Foundation Board. “We are eager to help the College further its goal of educating tens of thousands of students each year, who will develop the skills and knowledge that are needed for their growth and the advancement of this city.”

The projected costs for the scholarships are about $200,000 in the first year; $300,000 the second year; and, $350,000 in year three, according to Gregory Murphy, the executive director of the Community College of Philadelphia Foundation.

Generals added, “We would love to be in the position of providing tuition, fees, and books, but that cost would more than double the size of the endowment we should need.”

Contributions to the 50th Anniversary Scholarship Fund are being accepted, and donations have been received from staff, faculty, and stakeholders, Murphy said. In the long-term, the Foundation Board has committed to plan and support the College’s efforts to raise a $10 million endowment to sustain the scholarships.

Once the high school graduates determine they are Pell Grant eligible, the College provides “last dollars” for tuition and fees unmet by federal or state grants. The next step students must take to receive the award is to complete the College’s online scholarship application at www.ccp.edu/scholarships.

To be eligible, applicants also must meet the following seven requirements:

2. Maintain a minimum 2.5 cumulative grade point average at the end of each academic year

3. File a FAFSA renewal by May 1 and qualify as Pell-eligible for each year of eligibility

4. Meet with an assigned advisor or counselor at least once per semester

5. Participate in student success support programs and activities designed to ensure success at the College

6. Participate in at least one extracurricular activity (campus or community-based)

7. Comply with all requirements of the 50th Anniversary Scholars Program

Only students who are U.S. Citizens or permanent residents who reside in Philadelphia and have graduated from a Philadelphia high school within the Philadelphia city limits are eligible to apply for the 50th Anniversary Scholars Program.