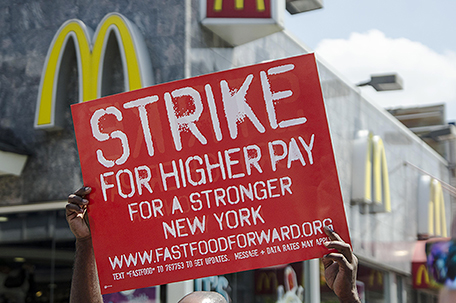 ABOVE PHOTO:  A protestor at a McDonald’s in New York.  (Photo by Annette Bernhardt/Wikipedia)

Last week, several thousand fast food workers from across the country gathered at a suburban Chicago convention center to press their demands for a $15 per hour minimum wage for the four million plus employees in the industry.

Underwritten by the S.E.I.U. (The Service Employees International Union), the fast food workers from McDonald’s, Burger King and other chains workers are attempting to unionize in order to pursue their goal of achieving a living wage. Flying in from cities as far flung as Seattle, Los Angeles, New York Atlanta, and the Carolinas, these 3,000 plus workers said they were proclaiming their rights as essential employees in an industry that has become a vital part of the American economy.

“If we win $15, that would change my life,” said Cherri Delisline, 27, a single mother who earns $7.35 an hour after 10 years as a McDonald’s cashier in North Charleston, South Carolina. “I get paid so little money that it’s hard to make ends meet, and I’ve had to move back in with my mother.”

Crowding over the weekend into an expo center west of Chicago, many wore boldly lettered T-shirts proclaiming “We Are Worth More” and “Raise Up for $15.” The gathering was notable for being the largest gathering of fast-food workers in American history. The S.E.I.U. A powerhouse union with more than two million members, has historically organized hospital workers, home care aides and janitors.

“We have adopted the fast food workers cause to lift low wage workers and combat persistent income inequality in America,” said S.E.I.U. President Mary Kay Henry. “Income inequality plaques all Americans, not just the fast food workers. It makes for an unjust economic paradigm that belittles all American workers—and creates a paradigm for the universal devaluation for all hourly wage earners.”

Rallying the crowd, a belligerent Henry attacked the C.E.O.s of McDonald’s, KFC, Taco Bell and Pizza Hut, who, combined, receive executive compensation of more than $10 million a year.

“A selfish few at the top are using their power to hold down wages, no matter how much that hurts families and communities across the country. In the meantime, these C.E.O.s make twice as much money in a day than all of their employees earn in a year…”

Glenn Spencer, executive director of the U.S. Chamber of Commerce’s Workforce Freedom Initiative, noted that the S.E.I.U. has pumped more than $15 million into the fast-food campaign. Spencer didn’t mince words when he spoke of the union’s tactics or it’s reasoning.

This isn’t about beneficence, “ Spencer noted. “You don’t put that kind of money in just to have a sense of altruism. You definitely have a plan for how that transfers into new, dues paying members.”

Janice Fine, a Rutgers University professor of labor relations, was even more succinct. “My sense is, there has been a recognition on the part of the  S.E.I.U. that to get the labor movement out of the very deep rut it’s in, it’s going to take more than an individual local organizing drive, and that this is a moment to do a large-scale, high-visibility effort to alter the climate for labor,” said Janice R. Fine, a professor of labor relations at Rutgers University.

“They have taken a sector like fast food where the conditions are well known: low wages, part-time hours, irregular hours, often no benefits.”

This is a high-stakes move that the unions hope will revitalize it’s sagging membership. Fast-food workers, backed by the S.E.I.U., have previously brought several cases before the National Labor Relations Board, asking its general counsel to declare McDonald’s a joint employer of the restaurants run by its franchisees. A labor board agreement in this case would open the door for the S.E.I.U. to try to unionize not just three or five McDonald’s at a time, but dozens and perhaps hundreds.

Austin Mims, a part-time fast food worker and full-time student at Fisk University, says that a raise to $15 an hour will make a tremendous difference in his current situation.

“I’m living here in Nashville all alone, “says Mims, who hails from Savannah, Georgia. “I’m in school studying, so I can’t take the kind of job that would pay me better wages but would tie up so much of my time. I have expenses—clothes, books and a social life. Fifteen dollars an hour will definitely change my life for the better. My family isn’t wealthy—so I have to live until I graduate and land a good job.”