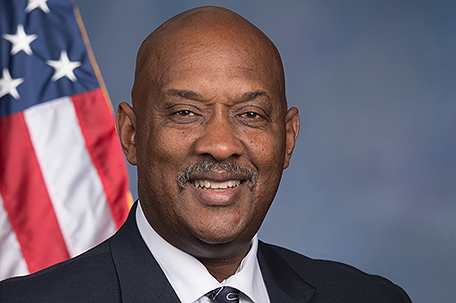 Evans — a member of the House Ways & Means and Small Business Committees — began the session by emphasizing the importance of supporting Black businesses and entrepreneurship, particularly in Philadelphia. Despite its population being 42% Black, only 2.5% of the city’s businesses are Black owned, he said.

The pandemic has been a nightmare over the past 19 months, killing over a half million people in the US, and Black Americans at a rate 2.8 times that of white Americans, which has had a devastating effect on the community, Evans added.

Busby — whose organization represents 150 Black chambers across the country in 42 states, as well as organizations in Canada and six African countries — said that US Black Chambers Inc. (USBC) is currently focused on three areas: policy, capital, and contracts.

When it comes down to current proposed federal infrastructure legislation, Busby wants to ensure full access for qualified Black businesses. He wants it from the private sector as well; decision makers in both areas often say that they are unable to find these qualified Black organizations or individuals, or that they somehow fall short for other reasons.

“We want to make sure the when the federal government goes and looks for Black -owned businesses that we have available firms that have the resources, that have the back offices, and [that they] are made available to take advantage of those contract opportunities, but we also [must] look at where corporate America is spending its money,” he said.

Black businesses took a huge hit last year at the start of the pandemic; that didn’t have to happen, Busby said.

“Many of the businesses you have heard of went out of business between the months of February and April (2020); 441,000 were forced to close,” he said. “The majority of them — 78% of them — said that the reason they closed was lack of information.”

The pandemic only exacerbated adverse conditions that existed for minority businesses, especially Black businesses without access to capital, Miles added. She has the distinction of working in both the corporate sector and in the federal government with CBC members Rep. Maxine Waters (D- Calif.), Rep. Joyce Beatty (D- Ohio) and the late Rep. Elijah Cummings (D-Md.) around matters of business, policy and more.

Collaboration and relationship building, as well as information sharing, has historically been a key factor for success in the African American community — that is still true today, Miles said.

“My grandfather was the first Black elected official [in Humboldt, Tennessee] —he was an alderman — and I remember as a little girl going with him to the NAACP meetings,” she said. “They would meet at the funeral home, and sometimes there would even be a body in there. The businesspeople — the hair stylists, the principals from the schools, the deacons from the church — you know, all of the Black leaders. They would talk about ‘Well, who can we put up for this position?’ because, like Ron mentioned, other people might not know who’s eligible, but certainly we knew plenty of eligible Black candidates for opportunities.”

While her grandparents would certainly be excited about the historic moment we find ourselves in when it comes to recent accomplishments such as the election of Vice President Kamala Harris and the many other business and leadership milestones African Americans have celebrated, it’s more than that — it’s about accountability, Miles said.

“The one thing that industry and government need to do is to do this effort [increasing support for Black businesses] with intentionality. … you cannot allow even the elected people, you can’t allow industry, you can’t let anyone off the hook in this process,” she said. “Everyone has got to do what they said they were going to do, and then they have to do it all the time. It has to become a part of the culture.”

“When minority programs are created, they are usually created with the idea that they’re going to improve conditions for all businesses,” Busby said. “Understand this — Black businesses have unique challenges, and when the broad brush of minority programs are created, many Black owned businesses are left out of that conversation. Unfortunately, it is many white women and white women [owned] firms that have been able to benefit from programs created for minority organizations.”

During the discussion, Rep. Evans paid tribute to the Rev. Jesse Jackson and the outsized role that he has played over the years when it came to his Black Wall Street Project and support of Black businesses overall. The panelists agreed.

“When we talk about economic empowerment, diversity, equity and inclusion programs, he [Jackson] started it,” Hill said. “He really was at the forefront, championing equity, and advocating for that.”

“Minority business enterprise today is a national imperative,” Hill said in her closing remarks. “I feel that this pandemic has been a wakeup call to America, in a good sense, because what it has done is shine [a] light on the opportunity that we have to correct things that have not been where they need to be.”