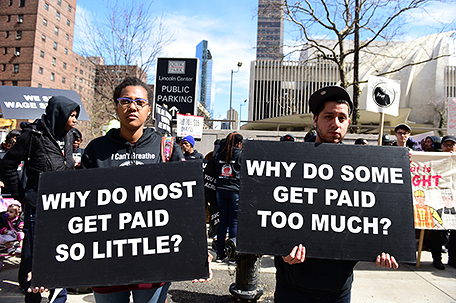 May 30, 2015 Category: Color Of Money Posted by: Philadelphia Sun Staff

ABOVE PHOTO:  a katz / Shutterstock.com

We have all heard the political rhetoric that has been used against unions, painting them as standing in the way of economic growth and as a drag on the freewheeling economics of recent years. However, history portrays a different picture.

New York Times columnist Nicholas Kristof writes it was during the 1940s and 1950s when union membership was at its highest that America experienced its greatest period of economic growth and prosperity.

It was a prosperity that was shared by the vast majority of Americans and created a healthy, robust middle class whose rising wages purchased the goods and services of American companies to ensure the continued success of those companies as well.

Kristof’s column from Feb. 19, “The Cost of a Decline in Unions,” points out how the decline of union membership has mirrored the rise in inequality. He said most studies suggest that anywhere from one-fifth to as much as one-third of the increase in income inequality among workers today is the result of the decline of unions in the private sector.

The greatest economic problem we face today is the ever-growing inequality in incomes. We live at a time where the wealthiest 1 percent amass great fortunes and continue to get wealthier, while the middle class continues to shrink as it falls behind in income growth, and more and more families slip into a state of poverty where the door to economic opportunity is barred and the hope of a better life seems beyond reach.

This is contrary to the cherished ideal of the modern American dream and is a glaring affront to our dearly held American values of equality of opportunity and a broad-based middle class. For as Franklin Roosevelt observed at the height of the Great Depression, “the test of our progress is not whether we add more to the abundance of those who have much; it is whether we provide enough for those that have too little.”

The economist Alan Krueger delivered a speech in 2012 that outlined the consequences of growing income inequality for both our economy and the vitality of our democratic process.

According to Krueger, as more income shifts to the wealthy, consumption and economic growth slows, income mobility falls, middle- and lower-income families borrow more money to maintain their level of consumption, and the wealthy gain more political power and influence which further slows economic growth and opportunity as policies are implemented to benefit the wealthiest.

To quote from Krueger’s speech, “the rise in income inequality in the United States over the last three decades has reached the point that inequality in incomes is causing an unhealthy division in opportunities, and is a threat to our economic growth. Restoring a greater degree of fairness to the U.S. job market would be good for business, good for the economy, and good for the country.”

There are things that we can and must do to reverse this dangerous trend. We need to invest more in education at all levels, from basic education to vocational and higher education. That is one of the best ways to foster economic opportunity. We need to create a fairer tax structure that reduces the burden on the middle class and working poor and calls upon the wealthy to pay a fairer share. We also need to provide capital to small business enterprises which are great job creators, and we need to make capital more readily available in fields like manufacturing that offer the best opportunities for job growth with a living wage. And, of course, we need to increase the minimum wage to ensure that those at the bottom of the economic ladder can make a better livelihood for themselves and their families that will better position them to work their way out of poverty. Many of these ideas are already part of Gov. Tom Wolf’s budget proposal for Pennsylvania.

If we strive for the enactment of policies to reduce income inequality and open the doors of opportunity, we can ensure a more promising future for all of our citizens. Let us also be mindful of the fact that those objectives have a greater chance of success if launched from the strong and healthy foundation of a shared sense of community. As Dr. Martin Luther King Jr. observed, “We are caught in an inescapable network of mutuality, tied in a single garment of destiny. Whatever affects one directly, affects all indirectly.”