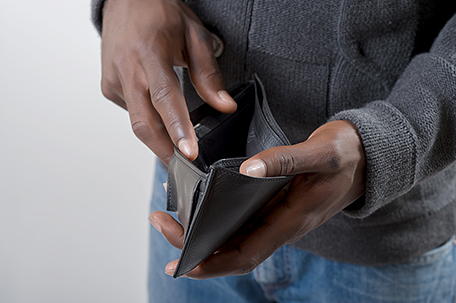 Is this a recovering economy or not? That’s one of the great, persistent mysteries stumping modern economists and pundits. Especially for African-Americans, the answer seems to be no.

Each month might reveal a gradually dipping unemployment rate, suggesting that it’s all good. The rate dropped steadily from 9.2 percent in September 2011 to 5.9 percent this September. But for African-Americans, the jobless rate is stubbornly stuck at 11 percent — compared with 5.8 and 7.8 percent, respectively, for whites and Latinos.

I turned to several leading economists to help sort it out: NAACP Economic Director Dedrick Muhammad; John Williams of ShadowStats.com; Gary Burtless of the Brookings Institution; and Michael Madowitz of the Center for American Progress.

Here’s some of their conversation:

Gary Burtless (@GBurtless): Long-term unemployment remains heartbreakingly high for a simple reason: The economic downturn between 2008 and late 2009 was exceptionally severe, and the rate of job creation since then has been slow in light of the massive job loss that occurred between early 2008 and late 2009.

Michael Madowitz (@mikemadowitz): People seem to have short memories when it comes to the labor market. We know underemployment and broader measures of unemployment are at unhealthy levels. The real question isn’t whether people have given up because the labor market is bad — we know they have. The question is whether they are on the sidelines until things improve or whether they are off the grid for good — forced into early retirement, working in the underground cash economy or not working for other reasons.

Williams: Long-term benefits are needed because the economy generally has not recovered, and job prospects remain bleak in the real world both now and in the near future. In theory, the government remains constrained by budget issues, but underemployment certainly should be a top priority. Fundamentally, action is needed to boost the economy and to create jobs, but there are few easy approaches to that at present. For example, areas such as trade policy and other elements driving domestic businesses and employment offshore need to be addressed in order to help bring back higher-paying production jobs into the U.S. That, however, runs counter to special interests pandered to on both sides of the political aisle.

Madowitz: All rates have dropped a lot, but we had a huge hole to dig out of, so we’re still well above what feels like a normal economy. The official rate has dropped the fastest, which you expect because there are so many ways to stop being counted in the official rate, and it’s within spitting distance of normal. But if you look at pretty much any other measure, you still see a labor market that is really struggling by historical standards.

Charles D. Ellison is a veteran political strategist and frequent contributor to The Root. Follow him on Twitter at @charlesdellison.