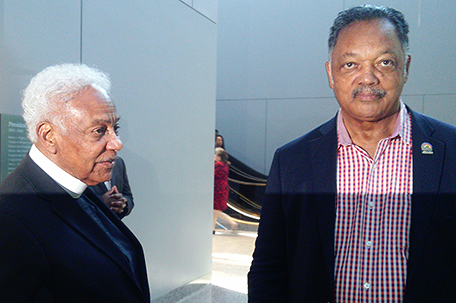 African Americans can still open businesses and find high paying jobs even amid the 2017 political climate. This was the message of the Rev. Jesse Jackson when he held a teleconference with media professionals from around the country. The Philadelphia Sunday Sun had an exclusive opportunity to ask Jackson questions which focused on Philadelphia.

Jackson began by giving an overview of the issues in 20th Annual Rainbow PUSH Wall Street Project Economic Summit being held at The Grand Hyatt near Grand Central Terminal in New York City from Feb. 15 through Feb. 17. This year’s theme will be “Celebrating 20 Years: Strengthening & Redefining Inclusion and Equality in the Corporate Marketplace.” The keynote speakers will be CNBC contributor Contessa Brewer, Black Enterprise CEO Early G. “Butch” Graves, and journalist Ed Gordon.

“We have to learn how to access other people’s money,” Jackson told the Sun. He stressed that cities like Philadelphia need to have resources come directly for urban renewal and redevelopment. He pointed out that when this happens, many job opportunities would become available to working class individuals.

“There would be jobs in transportation, to remove (debris) from land, painting, removing lead paint, removing weeds, landscaping. Our communities needs to be restored. We have to demand that Mr. Trump invest in urban America. We must demand that investments be made in the infrastructure like laying down pipes. This creates labor intensive jobs. Cleaning out lots is labor intensive. Then maybe someone can buy a lawn mower and start their own landscaping businesses. That is how you bring about equitable money,” Jackson said.

Jackson said that if the current administration is emphasizing entrepreneurship then they need to provide long-term low interest loans that the average person can qualify for. He singled out cities like Newark, Philadelphia and Chicago as ones that could particular benefit from this. “This is all part of the private sector growth,” Jackson said.

Jackson said that African-American young people need to learn about coding and advanced technology. Yet he also acknowledged that getting a degree is not enough if one is discriminated against in the job market. He said that political action is necessary to insure this is the case.

Jackson advocated for the Affordable Care Act to remain in place. He said repealing the ACA affects more than just the people who lose their health insurance. “There would be many job cuts in health care. You would see people dying,” he said.

Ultimately Jackson said that one will walk away with ideas how to go about getting employment in Silicon Valley, network with power players who are at the event, and learn tactics to increase voter registration and participation to insure the government enforces the EEOC codes and other civil rights laws.

Vicki Redmond of Mount Airy has attended previous Wall Street economic summits. She is a former enrollment services manager at Cheyney University, and owner of the old Atlanta Best Limousine Experience, which she owned from 1990 to 1998 before relocating back to the city to care for an ailing parent. At the summit, she saw the benefits for both salaried employees and entrepreneurs.

“This is one of the best well-organized conferences,” Redmond said. “It is multicultural. You have not only different [ethnic groups] but every aspect of the socioeconomics there, the whole nine yards. You have the opportunity to realize that money that the Rev. Jesse Jackson has really increased opportunities for business owners by running for president.”

“Until I went to the event I didn’t realize that Rev. Jackson running for president those times opened doors to many who our community with corporate America. It made me aware as I watched people of the older generation say how it was beneficial with them and has been beneficial for those who came after them. So, I saw the first, the second and other generations. Basically, this paved the way to open doors for Barack Obama to become president,” Redmond said.

This year’s Wall Street Project will have a range of workshop sessions. Among these are those in technology, finance, sports, generational diversity, and the Wall Street PUSH Tech 2020. The latter is an evening of live demonstrations from companies developing technology in New York City’s tri-state area, which includes New Jersey and Connecticut. There will also be an “Education Day” for middle and high school students interested in finance, retail, entrepreneurship, and technology.

“We’re looking to explore the two decades of progress and where do we go from here,” Jackson said. “We have accomplished a tremendous amount over the past 20 years. However, as we enter a new political landscape, we need to stay at the table to ensure true diversity is met.”

To register for this year’s Wall Street Project series call 646-569-5889 or visit www.rainbowpushwallstreetproject.org.

For those who cannot make it to the New York City for this event, know that Philadelphia will have its own offerings of opportunities that mirror the Wall Street Project. For instance, the “Next Generation of Athlete Dealmakers” will feature Duane Kinnon, ESPN’s Adrienne Lawrence, and NFL executive vice president Troy Vincent at the New York City event.

Philadelphia will be focusing on opportunities in sports from a scholarly angle at the 21st Arturo Schomburg Conference at Taller Puertorriqueno El Corazon Cultural Center, 2600 N. 5th St. on Saturday, Feb. 25 from 9:30 AM to 5 PM. This year’s theme is “Sports and Blackness: Inclusion.” It will focus on the contributions of African Latino descendants in professional sports and its societal impact by addressing the questions of inclusion, integration, both or neither. For more information visit tallerpr.org.

There is also local offerings for those wanting to participate own their own business. One can learn the beginning steps by taking “Business Plan Classes” through The Business Center for Entrepreneurship, Education and Connections. Classes kicked off on Monday, Jan. 30, but continue until Monday, April 17. They are being held at the Community College of Philadelphia’s Northwest Regional Center, 1300 W. Godfrey Ave. on Monday evenings from 6:30 to 8:30 PM. Courses are $350 plus materials and registration. Financial aid is available. Those with completed plans may qualify for loans up to $10,000 or more. For more information visit http://www.thebizctr.com/.

From Black Wall Street to the Black Dollar Project