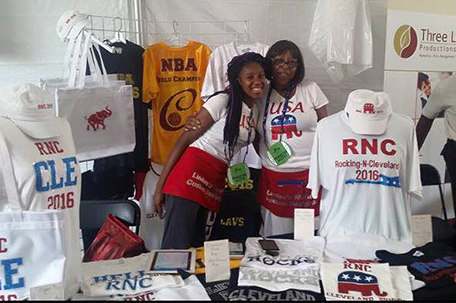 The Urban League of Greater Cleveland and the Republican National Convention are helping small businesses in the area get some exposure and make some money through a pop-up store in the Quicken Loans Arena parking lot.

I walked over to them because one thing that happens when you cover something like the RNC is that you get hungry. Free food, even if it’s a small cup of roasted walnuts, is going to get your attention.

But when it’s free food made by local entrepreneurs getting some exposure to the delegates of the RNC and making some money in the process, the walnuts are just that much tastier.

The Urban League of Greater Cleveland and Republican National Convention got together to create a pop-up store that gave entrepreneurs that are clients of the Urban League’s Entrepreneurship Center a chance to showcase their wares to a national audience.

When the Republican National Committee announced that it would be holding it’s 2016 Presidential nominating convention in Cleveland, Marcia Mockabee, president of the Urban League of Greater Cleveland, reached out to Jeff Larson, the RNC’s CEO, to talk about ways that the organization and its members who are entrepreneurs could get involved.

When the RNC hired C.J. Jordan to do outreach for communities of color in Cleveland, the idea for the pop-up began to take shape.

“She knew the Urban League’s mission,” Mockabee said. “So we thought that a marketplace would be a good chance to provide actual opportunities for the vendors that wanted to participate.”

Initially, 80 businesses signed up to participate, Mockabee said. That number was whittled down to 40, and those 40 were invited to an information session that would outline what would be expected of them as part of the process.

That number went down to 22 and once these businesses were vetted by the RNC, they participated in a pitch competition similar to the television show “Shark Tank”, according to Felicia Townsend-Ivey, business adviser for the Urban League’s Small Business Development Center. The 11 winners got the chance to showcase their wares.

For those needing a little help to make sure that they had the stock they needed and the money for tent rental, the Urban League made small loans available, Mockabee said.

The businesses involved relished the opportunity to showcase what entrepreneurs in Cleveland are able to do.

“It’s been interesting,” said Diane Linston, owner of Styles of Imagination. “It’s been really good for small businesses and entrepreneurs here in Cleveland.”

The store shuts down on Thursday evening, and the Urban League of Greater Cleveland plans to sit down and access its impact, Mockabee said. After that, the Urban League will make the best practices available to anyone interested in doing something similar, she said.

To get that information, you can reach Mockabee via email at [email protected]