Companies struggle to grow profits, look ahead to 2020 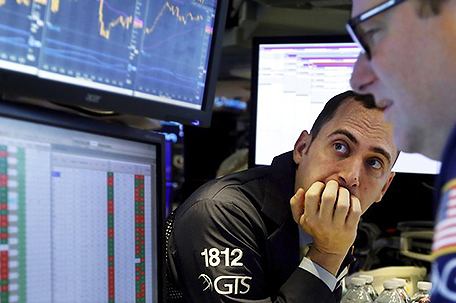 ABOVE PHOTO: A pair of specialists work on the floor of the New York Stock Exchange. Corporate profits continued their yearlong slide during the third quarter and analysts expect another poor performance before things start improving. (AP Photo/Richard Drew, File)

NEW YORK — Corporate profits continued their yearlong slide during the third quarter and analysts expect another decline this quarter before the numbers start improving.

Companies have been hindered by slower global economic growth, worsened by the U.S.-China trade war, in their efforts to increase profits from a year ago. Many with international supply chains have faced higher costs, and several sectors have seen declining global revenue.

U.S. companies are also having a tougher year by comparison to 2018, when sharply lower corporate tax rates helped goose profits.

Analysts expect profits to resume growing in the new year, starting slowly in the first quarter and accelerating after that. Much of the optimism centers around hopes for a resolution to the trade war and companies getting a clearer picture of where the global economy is headed.

Wall Street has taken this year’s quarterly profit contractions in stride, largely because companies, for the most part, have managed to beat already low forecasts. Analysts came into the third quarter expecting profits for the S&P 500 to fall 4%. With 97% of companies in the index reporting, profits are expected to have declined by 2.3%, with three-quarters of the companies topping expectations.

Reassured by those results, investors have instead focused on the broader U.S. economy and the Federal Reserve’s moves to lower interest rates. Consumer spending remains strong, with unemployment close to a five-decade low. Inflation is also restrained. Those have contributed to steady, if not spectacular, economic growth around 2%.

Fears of a U.S. recession, tied largely to a drop in manufacturing activity, have recently subsided.

Investors have been in a buying mood all year. The S&P 500 is hovering around a 25% gain for the year, while the tech-heavy Nasdaq is on track for a 30% gain.

“We are in jet propulsion mode right now as investors focus on the holy trinity of low, but positive growth, low inflation and accommodative central banks,” she said.

The RLJ Companies announces the formation of a strategic relationship with U.S. and Haitian partners to participate in the economic development of Haiti