CCP combats poverty as a way to support student success 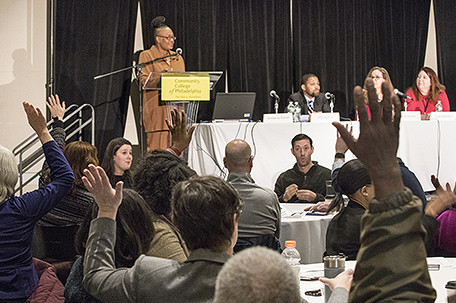 ABOVE PHOTO: Experts at Community College of Philadelphia discuss poverty in Philadelphia (from left to right) Kimberly Daniel, the moderator, was joined by Otis Bullock, Esq;   Paula Umaña; Lisa Johnson and Gilberto González.

New office buildings and shimmering residential towers are rising above the earth in Philadelphia, soaring over sprawling, technology-rich research and medical centers.

Yet, underlying this vibrant rebirth is a City plagued by deep, generational poverty and a lack of educational attainment. At just under 26 percent, Philadelphia’s poverty rate is the highest among the nation’s 10 largest cities.

The Pew Research Initiative’s 2018 “State of the City” report found nearly 400,000 residents in Philadelphia are living in deep poverty. For one adult with two children, that translates into an income of less than $10,000, which is 50 percent of the federal poverty threshold.

Poverty cast a long shadow over the economy. By 2020, an estimated 35 percent of job openings will require at least a bachelor’s degree, and 63 percent will require some college or an associate degree.

“It is our goal to increase the number of graduates to compete for the jobs of the future and take part in the city’s renaissance,” Dr. Donald Guy Generals, president of Community College of Philadelphia (CCP), said. The College, in fact, is preparing to break ground on a new Career and Advanced Technology Center in West Philadelphia that will provide in-demand skilled and technical talent and expand access to family sustaining jobs.

As a new semester unfolds, CCP, the City’s only open-admission college, is intensifying efforts to combat poverty as part of its strategy to support student success and degree completion.

Dr. Judith L. Gay, vice president for strategic initiatives and chief of staff, said in a recent professional development week session that employees are not expected to serve as social workers but rather encouraged to learn about community services so they can direct students in need of help.

For the first time, the College hosted a resource fair designed to allow faculty and staff to meet face-to-face with representatives of community organizations that address poverty and its related challenges such as access to healthcare, childcare, prenatal care, emergency housing and more.

The objective is to erect a series of safety nets that support the students at risk, Dr. Gay said.

A panel of experts examined some barriers to social mobility and offered ideas for broadening college services and supports, which currently include subsidies for childcare, emergency funds for students, a food pantry and community garden, free-tuition for eligible students and more.

Four major themes emerged: the importance of pre-k education and job opportunities for underserved youth; second, the complexity of poverty and its diverse faces; third, the effects of public policy on social mobility and need for citizen activism and last, the importance of relationship building.

Paula Umaña, who, through Single Stop, brings key services like free tax preparation services, healthcare enrollment assistance, immigration consultations, and legal aid to students, said the College community must be mindful of the way poverty is viewed and people are treated.  “I’ve learned that poverty is not a lack of character. Poverty is a lack of cash,” she said

Bullock grew up in poverty, where he said the focus is often on daily survival, rather than on making long-term plans or strategies for getting out. “In my family there was never a thought that we could even have a life outside of poverty,” he said.

Johnson, a nurse, said relationship building is an important tool, one that is stressed with Nursing students at the College who engage in service learning activities in underserved neighborhoods. Forging relationships is equally as important when helping students with challenges, she said.

”They are not going to talk about it (challenges) if you don’t build relationships,” she said.

Gilberto González, a graduate of CCP and community activist, focused on the effects of public policy regarding drugs, housing opportunities, law enforcement and other issues. For example, he noted the number of large housing projects are being torn down across the city and replaced by smaller developments with far fewer low-income units. “Where do those residents go?” he asked

“Poverty has a lot of moving parts,” González said. “The root is the lack of education. “Had I not come to CCP, I never would have made it at the University of the Arts,’

Dr. Gay ended the session by asking the College community to continue to identify solutions.

She asked, “What if we changed our approach so students can do better work?”

Beating the odds grad finds the support needed to juggle family and work, and make it through college

CCP turn winter break into a path to completion

Paving The Road to Student Success