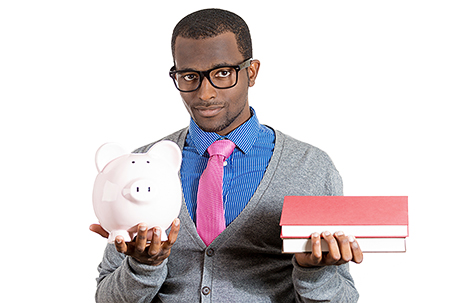 For most families, the pursuit of higher education means substantial investments in time, effort, and a combination of cash and loans to gain a college degree. These investments – both human and material — are made in confidence that the rewards, although often years away, will one day result in a marketable set of skills that can command a better standard of living over a lifetime.

Unfortunately, life does not always bring what was once hoped for. Decades of racial wealth disparities result in the majority of Black students borrowing more loans than their white classmates. Even after 12 years, student loan balances for Black bachelor’s graduates grew to 114 percent of the principal borrowed. By comparison, white bachelor grads who borrowed loans  owed only 47 percent of their principal for the same time frame.

This new finding comes from an education analysis by the Center for American Progress (CAP). Using U.S. Department of Education data, CAP examined long-term outcomes of student borrowers by race and ethnicity among students who began college in the 2003-04 school year.  After a dozen years, CAP found that the former Black students owed more on their federal student loans, and further that nearly half of Black college student borrowers also defaulted on their loans. As some might suspect, 75 percent of those who dropped out of for-profit colleges wound up in default.

“Seeing even African-American students who earned a bachelor’s degree struggle also reinforces that we cannot pretend the federal student loan program exists in a vacuum,” wrote Ben Miller, author of the analysis and senior director for Postsecondary Education at the Center for American Progress.

“Racial discrimination in hiring has not improved over the past quarter century,” Miller continued. “Perhaps it’s too much to expect student loans and postsecondary education to solve these structural problems, but sending African-American students into an inequitable adulthood with large debts from college can put them even further behind than they already start.”

The ‘further behind’ reference speaks to the $1,700 in accumulated wealth held by median Black households.  Household wealth is typically determined by subtracting all expenses and debts from cash sources and reserves like savings accounts and/or investments.

A second important review of the nation’s student loan crisis adds more reason for concern.  The annual Student Loan Ombudsman Report released by the Consumer Financial Protection Bureau (CFPB) found that over the past year, 56 percent of student loan complaints received by CFPB were about federal loans. Among federal loan complaints, 71 percent were about either a lender or servicer. Many borrowers continue to struggle to access the protections guaranteed under federal law. These laws were designed to help borrowers avoid delinquency and default during periods of economic disruption like long-term unemployment. 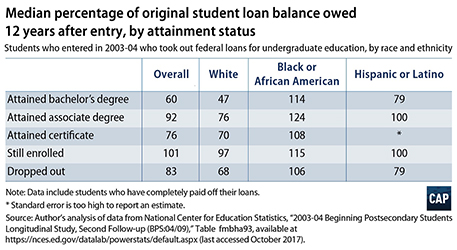 This chart from the Center for American Progress shows student loan default rates by race for various types of students.

“As borrowers continue to fall through the cracks of our broken student loan system, the Bureau’s work to date offers a roadmap for consumer-driven reforms,” said CFPB Student Loan Ombudsman Seth Frotman. “When borrowers are empowered to stand up for themselves, they can shape policy and spur government to take action. We have much more work to do to build a student loan market that works better for consumers.”

If lenders and servicers had done a better job with student loans, CFPB would not have needed to return more than $750 million to mistreated borrowers. One can only wonder how many defaults could have been avoided if servicers had been more accurate and efficient.

“Just as there were mortgage borrowers who unnecessarily went into foreclosure during the housing crisis, there are now borrowers who are unnecessarily defaulting on student loans when alternatives exist to protect their payment affordability and their credit ratings,” said Whitney Barkley-Denney, a senior policy counsel with the Center for Responsible Lending (CRL) and a specialist in student loans.  “These unnecessary defaults, in many cases, contribute to the 2,300 debt collection complaints involving student loans.

“Something is wrong when in a single year, there are more complaints about taxpayer-funded loans than there are about private ones. This finding reveals how the ill-advised recent revocation of an information sharing agreement by the Department of Education with the CFPB is really hurting borrowers. As this report suggests, there should be more oversight of Department loans and servicing, not less. This includes oversight from independent agencies like the CFPB and state regulators.”

Readers may recall an earlier column that shared how under Secretary Betsy DeVos, the agency severed its information-sharing agreements with the CFPB. It would seem to be common sense for two federal offices to work cooperatively and collaboratively to resolve student loan issues. Perhaps the Education Department will reconsider its decision and make a good-faith effort to better serve student borrowers.

It’s hard to build wealth when debts don’t go down or away. But it is tragic when those who did everything to build a better life cannot get a fair deal on a taxpayer-funded education program.

Charlene Crowell is the deputy communications director with the Center for Responsible Lending. She can be reached at [email protected].