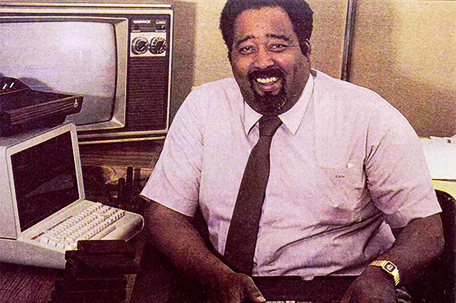 An early computer hobbyist’s club in Southern California has some pretty heady history behind it. You’d be hard pressed to match the geek cred of some of its members — Steve Jobs and Steve Wozniak, for example — and Jerry Lawson.

The late Gerald Anderson Lawson, known as Jerry, along with Ron Jones, were the only two members of color of the Homebrew Computer Club in Silicon Valley.

The club began in 1975 when hobbyists — most with an electronic engineering or computer programming background — met to talk about the Altair 8800 and to exchange schematics and programming tips.

The Brooklyn, N.Y.-born electronic engineer, taught himself everything he knew about designing. His impressive creation of the Fairchild Channel F video game console separated him from his contemporaries such as Nolan Bushnell and Ralph Baer.

The Fairchild Channel F console was released by Fairchild Semiconductor in November 1976 and was the first programmable ROM cartridge-based video game console, as well as the first console to use a microprocessor. Baer wrote the first video game played on a TV set, called Chase, and in 1972, Bushnell helped create the game Pong and later that year started Atari Computers.

But it was Lawson’s main distinction as the inventor of the video game cartridge — something that seems simple now — that set the standard for how video games were played for the next 30 years. The cartridges were sold separately, unlike previous games that were built into the hardware.

“The whole reason I did games was because people said, ‘You can’t do it.’ I’m one of the guys, if you tell me I can’t do something, I’ll turn around and do it,” once told Lawson San Jose Mercury News reporters.

As we continue to celebrate Black History Month, we are honored to introduce those who are unfamiliar with Lawson’s work and history, and help highlight some significant moments during his career.

1. Lawson was a self-taught engineer

While growing up in the projects of Queens in New York City, Lawson got a start on his lifelong tinkering. His love for all things electronic and “gadget-y” compelled him toward the engineer side of things. As a youth, he operated his own ham radio, and as a teenager he made money by repairing his neighbors’ television sets.

2. Lawson founded and ran his own company

Videosoft, a video game development company, was created by Lawson, who used it to produce cartridges for the Atari 2600. When the 2600 came out, it effectively made the Channel F obsolete. Unfortunately, the company only released one, which was a technician’s tool called Color Bar Generator.

3. Lawson was in a group that had steve jobs as a member

The Homebrew Computer Club, an early collective of computer hobbyists, would go on to produce such other legends as Apple founders Steve Jobs and Steve Wozniak. Lawson and Jones were the only Black members. Jones developed a way to reprogram inkjet printers to enable desktop computers to produce silk-screen quality printing, and later came up with the idea for transforming Nintendo’s Game Boy into a portable music player in 1999.

4. Lawson was honored by the international game developers association

On the eve of his eventual passing, in March 2011, Lawson was honored as an industry pioneer by the International Game Developers Association. His accomplishments as an engineer and inventor were appreciated by the IGDA. A month later he passed away from complications of diabetes.

5. Lawson Produced One Of The Industry’s Earliest Arcade Games

Debuting in a southern California pizzeria only a few months after Allan Alcorn’s Pong, Lawson’s Demolition Derby marked one of the earliest arcade games in the industry. Lawson would go on to work with the Stanford University mentor program in an attempt to write a book on his career.

The Fairchild Channel F, albeit not reaching the heights of popularity likes the Atari, Nintendo and Sega, did have one thing above its competition: an interchangeable game cartridge. Predating the Atari’s video computer system by a year, the Channel F released 26 cartridges that ranged from sci-fi (Space War) to cards (Blackjack) to sports (Bowling). Game machines like the Atari and the Magnavox Odyssey (created by the late, great Ralph Baer) all had their games built into the hardware.

The few within the growing video games industry could believe that a microprocessor would work independently within a console. Lawson not only innovated the culture, he also diversified it with his impressive invention. The Channel F home gaming console was designed by Mr. Lawson using the Fairchild F8 CPU, which was the first public outing of said processor. The F8 was very complex in relation to the typical integrated circuits of the era, and it had more inputs and outputs than other contemporary chips. Back in that time, chip packaging was not available with enough pins, but the F8 was fabricated as a pair of chips that were used together to form a complete CPU.

His father, a longshoreman, had a strong affinity for all things science. At a young age, Lawson was gifted interesting items like an Irish mail, which is a handcar typically used by railroad workers. His mother was so vested into his education that she made it so that Jerry attended a well-regarded elementary school. She eventually became the president of the PTA.

“I had a picture of George Washington Carver on the wall next to my desk,” he told Vintage Computing in an interview. “And she [my first grade teacher] said, ‘This could be you.’ I mean, I can still remember that picture, still remember where it was.”

From repairing his neighbor’s television sets to running an amateur radio station out of his housing project, Lawson taught himself most of what he knew about engineering. He attended Queens College and the City College of New York before taking his talents to places like Grumman Electric and Federal Aircraft. He went from running an antenna out of his window with a radio license to being an influential part of Silicon Valley.

11. Lawson’s invention caught the attention of the FCC

Nobody had ever done something like what Lawson was proposing. Interchangeable cartridges was a new concept. With that said, the FCC was interested in how Lawson beat them to the punch in creating his own microprocessor. Every cartridge that Lawson produced (26 to be exact) had to be approved by the FCC.

Standing at 6 feet, 6 inches tall, Lawson was a sight to behold in an industry mostly relegated to nerd culture. According to an interview he did with Vintage Computing, race affected his job prospects “as both a plus and a minus.” If he did well, he would receive widespread notoriety. If he failed, it would be marked as an expected disappointment. Through it all, he encouraged other young Black men and women to become invested in science and engineering careers.