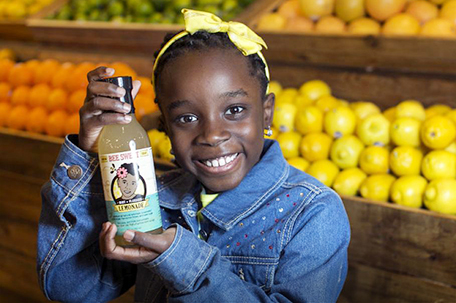 Business is business, and an 11-year-old entrepreneur has proven that if one just makes up their mind to it she can have the business of her dreams. Mikaila Ulmer was first seen on “Shark Tank” where she won a $60,000 investment to fund her lemonade business. Now branded as Bee Sweet Lemonade, she has signed an $11 million deal with Whole Foods to have her product placed in 55 locations across four states.

The sixth grader from Austin, Texas initially started out as just a lemonade stand, selling lemonade that she made from a 1940s recipe created by her grandmother. The recipe uses mint, flaxseed, and local honey as its sweetener rather than processed sugar, all infused into the finished lemonade. From there she branched out into mixing it for local events and local food chains.

According to “Time”, Bee Sweet Lemonade (which will soon be re-branded under the name “Me & The Bees”) will first be sold in Arkansas, Texas, Louisiana, and Oklahoma. If sales prove to be successful, the distribution for the lemonade will expand across the United States.

The concept for her business was actually birthed in a negative experience with bees. Essence Magazine says that at the age of 4, Mikaila was stung by a honeybee twice in one week. From that point, she developed a fear of bees.

“I didn’t enjoy the bee stings at all. They scared me. But then something strange happened. I became fascinated with bees. I learned all about what they do for me and our ecosystem. So then I thought, what if I make something that helps honeybees and uses my Great-Granny Helen’s recipe?”

Mikaila considers herself to be a “social entrepreneur,” and to that end she donates a portion of her proceeds (about 20 percent) to organizations that are working to prevent the extinction of the endangered honeybee population.

Since her rise to fame, Ulmer has been invited to visit the White House and, according to AOL News, even served her famous lemonade to President Brack Obama. She has also won a variety of awards and honors in the categories of food and entrepreneurship.

During her appearance on “Shark Tank,” Mikaila wowed Fubu CEO Daymond John with her business acumen, writes CNBC. He decided to put his money where his mouth was and invested the $60,000 seed money to fund her dream.

Previously at the South by Southwest Festival, Ulmer announced that in addition to the Whole Foods contract she has gained yet another deal for expanded distribution through United Natural Foods, and apparently that is also a multimillion dollar payoff.

Along with all of the focused time and effort that she is putting into building up her own company, Mikaila is also finding time to give back to the community.

“Now I am helping my friends start their own businesses.”

One may wonder where an 11-year-old finds the time and energy to do all of this. On questioning, Ulmer says that she credits her family for all of the support and assistance that they give, and she only works on the company after she has completed all of her schoolwork.

Adding to the equation, Mikaila’s mother maintains a diligent eye towards ensuring that she maintains a healthy work-life balance.

“Every weekend she does something that she enjoys. It may be rollerblading this weekend, sleepover this weekend. You create a balance because she is working as hard as she is playing.”

No one can predict for certain how high Mikaila will soar in her lemonade business or how successful she will be in her entrepreneurial pursuits, but if her present track record is any indicator, you can probably place a bet that it will “bee” very “sweet”!

Try sweet potatoes for a healthy, flavorful addition to your family dinners

Easy cherry recipes are a sweet start to summer