A one on one with Shermill Whiting: Real estate with heart 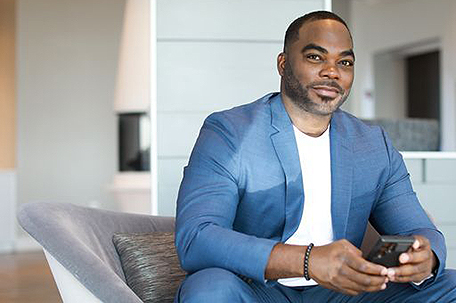 North Philadelphia native Shermill Whiting was raised by his grandparents, who owned a personal care home, and who instilled a solid work ethic in him early in life. Their work inspired him to pursue a career in real estate, where Whiting went on to become a multi-millionaire real estate mogul as the owner of Whiting Real Estate, Holland Home Care Agency, LLC and Holland Transportation. Whiting spoke with SUN about his journey to entrepreneurship and the lessons he’s learned along the way.

Inspired by his grandparents’ business acumen and their desire to give back, Whiting was compelled to follow in their footsteps.

Whiting began contributing to his family’s business while he was in college before branching out on his own.

“When I was in college, they needed help filling beds and wanted to expand the company,”  he said. “I started to reach out to other senior centers to let them know exactly what we have as far as marketing. I wanted to show my worth – [that] I can do this. Although I’m in college, I’m fully [equipped] to jump in there and spear this thing for you guys. About two years later, those calls worked out for me. I actually received a call back from those calls in reference to housing.”

Whiting pursued that opportunity with his girlfriend at the time and that became the start of his real estate company.

“I’m very optimistic,” he said. “I believe in energy and I believe in timing, so if I got this call saying, ‘Hey, do you have anything?’ I couldn’t say ‘No, I don’t have anything.’ I didn’t have a house, I didn’t have nothing. But what I did know is I could rent a house for the person that they needed care or housing for. I can rent a house and I can still become a resource for these people — when they call me, I can answer that call. At the time her dad had this house that was vacant. I said, ‘Let’s see if he’ll let us rent this house from him for the same amount as the people before us.’ I wasn’t really making a lot of money from the person that was moving into the home, because it was three rooms. I moved the person in and they gave me what they could for the room. It didn’t really work out with the lady I moved in, but I felt like it was an opportunity to get our feet wet. From there it was yard out. We focused on being a resource for people… fill the need.”

Whiting was a young father at the time, having daughters when he was 16 and 22. When he began his real estate business, he had just gained custody of both of his daughters and was also present for his girlfriend’s son. He and his girlfriend worked, saved money, made wise decisions during tax season, and with help from family, they were able to purchase their first property.

“We found a property in Port Richmond,” he said. “It was $22,000 — this was back in 2011 or 12. We put our money together and went to purchase the property. Her dad, who was a contractor and roofer, went with us to see the property as well. He was a key part in helping us with certain things. We got a loan from the bank and used his company to fix up the house.”

Whiting wanted to continue building his portfolio and his legacy and began doing that by forging relationships.

“We got a short sale — we were lucking up,” he said. “Things were just aligning, because we were creating relationships with realtors. This one realtor in particular would give me the lockbox number. I would go see five houses a day. That was our day — me just being locked in. We (his girlfriend and partner) sold the first house. We got it for $20,000 and sold it for $60,000. Then we bought a house for $35,000 — that’s when we started putting tenants in there that needed care. We then purchased another home, and now we have people in both of these homes, and she and I are taking care of them.”

Whiting’s desire to help those in need led him to provide care and housing specifically for veterans and people with disabilities.

“That was day one taking people in,” he said. “For me working at the hospital, I looked at it, like,  if I can take care of these people on the unit, what is the difference in me taking care of people at my house? I can take everything that I’m learning here, and that I’ve also learned from my grandparents, mesh it together with my people skills I’ve learned over time, and put that energy towards something that we’re doing.”

Whiting remained dedicated to his mission to fill the need. He expanded his efforts to help by creating Holland Transportation, a medical transportation service.

“The transportation situation came about because I would have people that lived in our homes that had something called LogistiCare,” he said. “They would go back and forth to their doctors’ visits. At times I would get a call saying, ‘They didn’t pick me up yet’ or ‘They’re having me sit here well over time to make my appointment.’ I said, ‘Let’s get rid of LogistiCare. We can take care of everything in-house. That’s how we started, because we watched another company fumble with our people and we didn’t want that. We took pride in our people and said you don’t have to be treated like that.”

Whiting efforts to give back to his community also include utilizing his resources to help youth in need.

“The give back I want to do is more or less an experience. Last year, we took five kids and did a wishlist,” he said. “We took this wishlist from a source where we knew for a fact these kids were in need. I dressed up as Santa Claus and took them everything they wanted on the list from our company.  My wife and I dressed up the transportation van, decorated it with lights, and took it to them. This year, I want to take kids to a Sixers game and rent out a club box and give them the full experience.”

Whiting faced many challenges on his journey to success, but remains grateful for the growth he experienced as a direct result. He shares the biggest lessons he’s learned thus far.

“Everything has to make sense; one thing has to help the other and you can’t do things for money,” he said.

Shermill Whiting continues to inspire, letting his heart pave the way in his efforts to help within real estate and beyond. To keep up with his journey, you can follow him on Facebook and IG at Shermill Whiting and @mr_hollandinc respectively. Also, be sure to follow his company pages on IG @HollandHomeCare and @Hollandtransportation.