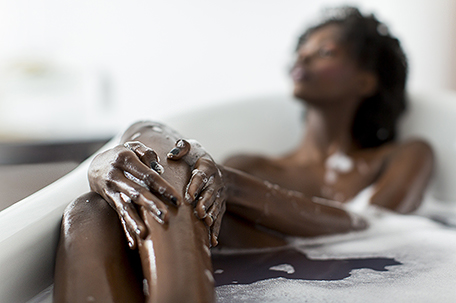 Pine tar is a substance that has been used for centuries. It has a variety of uses but is primarily used as an ingredient in soap. You may have seen it and wondered what pine tar soap is, and why it’s used.

Pine soap is used in soothing treatments for skin conditions such as eczema and psoriasis. It is also said to relieve itching caused by bug bites.

Forty-year old Clinton Boyd remembers, summer visits to the backwoods of North Carolina, where he spent summers on his grandparent’s farm. “I remember being thankful for the pine tar soap and ointment my grandmother made. They helped keep the multitudes of swarming mosquitoes away during those hot summer months.”

Boyd recalls that on the farm there were more uses for pine tar than medicinal. “Pine tar was used in veterinary medicine to treat a variety of conditions for cattle and chickens. It was used in medicinal applications as a treatment for various skin conditions as well.”

Today, pine tar has a wide variety of applications — from maritime uses, medicinal uses, to the production of soaps — and it was a great money-maker in the post-independence periods of the United States. 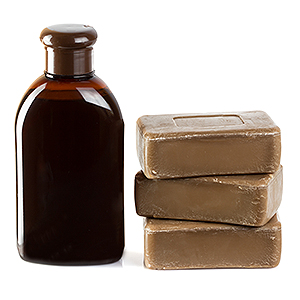 Pine tar soap’s main ingredient, pine tar, is a sticky substance that results from burning the wood of pine trees. Historian Thomas Gamble, an expert on the history, production, and distribution and consumption of pine tar, wrote about its origins. Gamble notes the use of pine tar originated in Scandinavia and was used as a preservative to protect wood from the harsh winter conditions as well as the bottoms of Nordic skis.

It later became an important export from the American colonies as many areas were covered in pine forests. North Carolina and South Carolina were major U.S. exporters. Ropes and rigging on ships were sealed with pine tar to prevent rotting from the harsh conditions and exposure to sea water. British sailors were nicknamed “tar” for this reason. Pine tar is used on the handles of baseball bats because the stickiness of the substance supports batter griping.

Pine tar soap is a natural soap which has long been touted for its medicinal benefits in the treatment of skin conditions, plus treatment of dandruff, according to Jim Champion, a candle and natural and organic soap maker.

Champion explains that pine tar, as well as pine oil, has a strong pine smell when it is combined with other scented oils as well as essential oils for use on the body.  “It is said to have antibacterial and anti-fungal qualities and is useful to soothe and treat symptoms of poison ivy and oak.”

Pine soap, Champion says, is also used to treat skin conditions such as eczema and psoriasis and it relieves the itching caused by bug bites. Additionally, he says, it is a common additive in shampoo and is used to treat the inflammation and itching of the scalp due to dandruff. 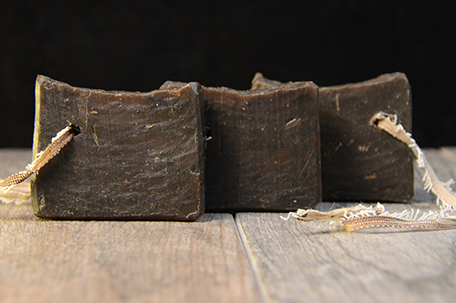 Traditional Use in Soap

“Pine tar has been a common ingredient in soaps, spanning hundreds of years. It is still used today, especially in natural soaps and organic soaps,” notes Champion.

“Pine tar soap is refuted to be irritating to some people, but the fats and other oils found in soap dilutes the pine tar and pine oil so it does not cause irritation” illuminates Champion.

Coal tar soap, another black soap, defined by Champion as a very different product with similar skin treatments and results, made from coal tar and used to treat dandruff, kill lice, and treat similar skin conditions. Pine tar soap and black soap are not the same product, but offer similar uses, opines Champion, who notes that coal tar soap’s pungent odor can be masked with essential oils”.

Because pine tar soap has antifungal and antimicrobial properties, Champion believes it is perceived as an effective method for treating certain bacterial and fungal infections, such as athlete’s foot or jock itch. It is also commonly used by people to treat unpleasant odors of the feet or armpits.

Clinton Boyd, when weighing in on the current benefits of pine tar soap, says he still uses pine tar soap and enjoys its fresh, pine scent, a holdover from his youth.

GOP tries again to tar Obama as soft on defense