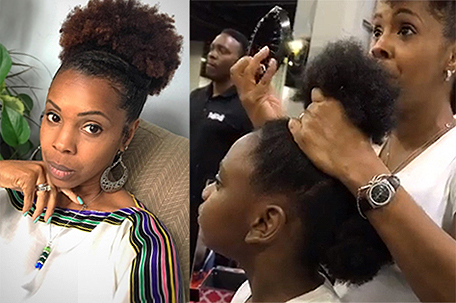 Nationwide — The concept for PuffCuff was born out of necessity when Ceata Lash, the founder and inventor of PuffCuff, decided to stop chemically straightening (a.k.a. “relaxing”) her hair and go natural. While trying different hair styles with her new natural hair, she discovered it was impossible to find accessories to accommodate the thickness and texture of her hair. They simply did not exist!

Lash became determined to find a solution. Her research revealed there were men, women and children with similar hair types all experiencing the same styling woes. It became clear there was a need for an easy-to- use styling tool that would help achieve quick trendy looks without causing pain or damaging hair.

After much research and design, PuffCuff LLC was launched in 2013, and in November 2016, Lash became the first African American woman to be granted two patents for a natural hair accessory. PuffCuff is an easy-to- use simple hair clip that won’t break, snag or rip hair out and creates a variety of trendy hairstyles for natural hair; including styles that can incorporate locs, twists and braids.

Its unique newly patented circular design locks into the texture or curl of the hair with its gentle teeth, never pulling or putting stress on the hair like most other hair accessories. With four sizes to choose from, this unisex tool meets the needs of a multicultural society who desire healthier styling options.

Since launching, the PuffCuff has had tremendous success via word of mouth from their many satisfied customers and have developed a cult following in the U.S. and abroad.