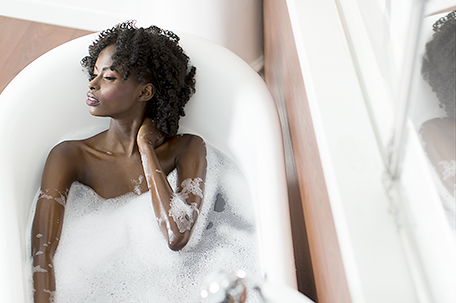 If you ask most women what they know about African black soap, their responses is typically “I really don’t know much about it.” However, a bit of minor research reveals the product does wonders for the skin and the hair.

Women like Nancy Connors recalled visiting open-air markets or festivals and stopping at vending table is laden with an array of natural beauty products.  Next to the one-pound tubs of shea butter, there was always a display of African black soap.

Connors admitted being curious about African black soap. “I always noticed its qualities– color, texture and shape,” she said, noting that vendors always touted the health and beauty qualities of the product.

She was prompted by the claims of others who believed the soap could remedy anything from eczema to skin blemishes to scalp problems to try it. “I decided to research their assertions. I wanted to know what African black soap was and if it could really live up to those claims.”

What actually is African black soap? According to soap-maker Nadira O’Neill, African black soap is created from the ash of organic materials such as plantain skin, palm tree leaves, cocoa pods, and shea tree bark. She explained the production process. “The leaves and bark are sun-dried and then roasted in a kettle or pot at a consistent temperature, which ensures its color, texture and smell. Then water and various oils – palm oil, coconut oil, palm kernel oil (including shea butter and cocoa pod powder) – are added to the mixture and stirred for at least a day. After that, the “soap” is left to set for two weeks to cure.”

African black soap, (also known as Anago Soap, Alata Simena, or Ose Dudu), is traditionally made in West Africa (usually Ghana and Nigeria) from secret recipes that have been passed down for generations among diverse tribes and communities. Most have their own secret blend of oils and techniques which result in the different color variations among black soap. The ash itself was often used for its healing properties. Varieties of black soap that are actually made in Africa tend to be pure, while soaps made in Europe or the United States, more often than not, have added artificial ingredients.

According to O’Neill, traditional African black soap has a dark brown shade, but is not fully black. It has a “natural organic soft shape with an earthy unscented smell”. She explained that the soap is beneficial to skin and hair because it is completely free of chemicals.  The plantain skin– its main ingredient– is a natural source of vitamin A, vitamin E, and iron.

“People love this soap because it is a multi-purpose product. It may be used to relieve acne, clear blemishes, razor bumps, and treat a variety of skin problems,” opined O’Neill, who also uses the product, and said it gives her skin a deep clean, leaving it radiant and healthy. Many women, she added, even use it to remove their makeup.

Providing a history lesson about African black soaps as a beauty product, O’Neill, who has practiced her craft for more than a decade, explained that for centuries, African black soap has been used as a shampoo because it eliminates stubborn oil and dirt from hair, scalp, and skin, while leaving its texture soft and manageable. Although this soap cleans very well, it is safe to use on even the most sensitive skin.

When purchasing African black soap, O’Neill cautions you not to be fooled by imitations.  “There are many faux products out there and consumers don’t even realize it.”

However, spotting the fakes are easy for those with a discerning eye. According to O’Neill fake African black soap is hard, dyed black, and does not contain the soap’s traditional ingredients. Instead, it contains inexpensive vegetable oil and is chemically processed. It also may stain your towels and wash clothes.

There also are an array of newly marketed products. In addition to the vendor’s table at local flea markets and festivals, major stores and Internet-based outlets are selling African black soap. O’Neill cautions consumers to be wary of products like “Liquid Black Soap”, which should not be confused with traditional black soap. The former, she said, is comprised of very different ingredient. “Make sure you check the product ingredients of whatever you buy,” said O’Neill “And if possible confer with the manufacturer or the vendor.”

Now that African black soap is no longer a mystery, it might deserve a place in your beauty regimen.

So…What exactly can shea butter do for my skin and my hair?

Making your own whipped shea butter moisturizer for skin and hair