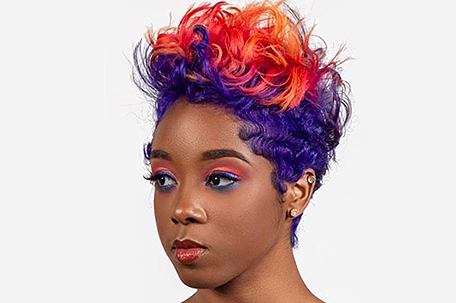 ABOVE PHOTO: by Will Mydell

Nothing says spring like blue skies, sunshine and the wide array of hues that decorate blooming flowers.

Reddick fell in the love with the art of hair styling at the ripe age of 17. After styling the coifs of friends at school, she took her talents to the professional level, becoming a licensed stylist. Over the past two decades, Reddick has cultivated a style that is uniquely her own — one that features hair with highly boldly pigmented colors. Not only is Reddick’s boldness reflected in her work, but also in her personal style. Reddick –who is Muslim and wears a niqab — took on the name “The Covered Colorist” — an ode to both her faith and her passion for the hair industry.   She opened up about how both identities coincide in a world where she constantly has to prove that she is more than what meets the eye.

Coloring and its popularity have gone through several transitions over the years. Inspired initially by watching YouTube videos of color specialists Cynthia Lumzy and Guy Tang, Reddick’s creativity continued to grow wings.

“I saw this creativity with color when vivid coloring wasn’t a big deal,” she said. “You had your reds and your blues here and there, but people weren’t doing rainbow colors at that time. So I started introducing color to my clients and some people I would do their hair for free just so I would be able to have some creative freedom. Having a creative mind set and being able to create these bold colors felt like it was something against the rules.”

That creative freedom and thinking outside of the box continued with Reddick conceptualizing her signature styles and looks. She has a unique way of describing what she does.

“What I do is called color melting. It’s when you see a transition of color without knowing where it starts or where it ends.”

But being the “The Covered Colorist” hasn’t been necessarily the easiest thing for Reddick in an America where Muslims are seen as the enemy. Being a hairstylist while wearing a niqab has given Reddick a unique perspective.

“Being in the hair industry fully colored is kind of rough because people have very low expectations from somebody that looks like me,” Reddick said. “They look at it like, ‘What does she know about fashion? What does she know about style? What does she know about hair? She’s always covered up.’ I’ve gotten really heavy backlash and recently I had someone say that [hairstyling is] contrary to what I believe in. People have said, well you cover yourself up but you want to be in the hair industry? What does that have to do with my creativity? I shouldn’t be judged by how I look, that doesn’t determine how creative I am. I’ve also had situations where people tell me to go back to where I came from. I have to laugh about it and ask where is that? South Philly.”

“I haven’t always been Muslim, so practicing Islam, being diligent and moving forward in the industry… I’ve had to really put myself out there and make a name for myself,” she added. “A lot of times when people see my work and see a picture of me it’s like… she did that? So it’s a little heartbreaking because I don’t want to be judged by how I look. I want people to look at my work and say she’s very talented, not say she’s all covered up why is she doing this? Sometimes I’ll go places and it’s like the whole room is just waiting to see what I’ll do and it’s uncomfortable. I’ll go in bathrooms and people walk out because I walked in. I travel a lot for work, taking classes to strengthen my craft, and even getting on an airplane is really difficult. Sometimes it’s disheartening but I’m doing what I’m doing for me so it’s not about what other people think. I just pray for my safety.”

Despite the continuous uphill battle that comes with dealing with closed-minded people, Reddick continues to travel often, and fully immerse herself into the world of color. With spring in the air and summer right around the corner, Reddick shared some of the color trends we can look forward to for the spring and summer seasons.

“Rainbow hair, unicorn hair, short cuts and color, pixie cuts and color — short hair is so in right now. When you’re working with short hair, the vibrancy with the color is beautiful. It’s almost summer time so everybody is excited about new colors and a lot of the bolder colors are coming to the forefront. Bold color is in!”

Reddick encourages people considering color to stay true to themselves but also not to be afraid to try something new.

“I have a lot of people that want to get their hair colored but they’re scared because they don’t know what to expect. They have so many new things now to help strengthen the hair prior to getting colored, and if you have someone who knows what they’re doing it makes it easier to get it done because you can trust it. I do consultations so I’ll be able to tell you if your hair is strong enough to be able to take color or you may not be a candidate. Some people also have to be careful with their jobs where they can’t wear color. I formulated different techniques where you can have a patch of color. You can comb it one way so you can’t see it, but when you want to go out on a Friday night, you can flip it to the other side and there’s that bold color!”

Reddick provides services for clients that are natural and relaxed. As it pertains to service and color, with Reddick the possibilities are endless.

Hullema Reddick’s salon “Hstylze Hair Studio” is located at 3502 Scotts Lane, Building 19, Suite 1921 until August, when it moves to Suite 1421 in the same building.. To stay up to date with all that Hullema Reddick is doing, follow her on Instagram @hstylze.

When choosing the best summer hair color opt for contrast