What every Black woman should know about hair loss and fibroids 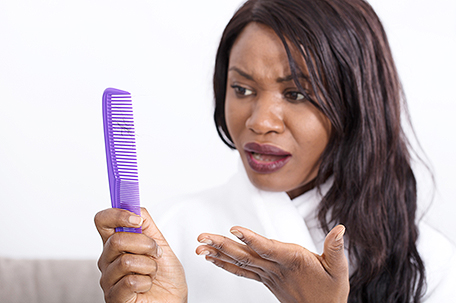 A recent study shows that black women with a relatively similar type of hair loss may also be at a high risk of developing fibroids.

What are fibroids? Fibroids are fibrous growths that develop in or around the uterus. On average, about 80 to 90 percent of Black women and 70 percent of White women develop fibroids by the time they turn 50. Not to worry, these growths are mostly benign and noncancerous.

Black women are the ones usually affected by CCCA, which makes it the most common hair loss condition in this group.

“The cause of the link between the two conditions remains unclear,” says Dr. Crystal Aguh, the author of the research and an assistant professor of dermatology at the Johns Hopkins University School of Medicine in Baltimore.

Even though the research still does not prove that one condition causes the other, there seems to be some kind of connection between the two. Nevertheless, the findings still suggest that women with CCCA be checked up for fibroids or any excess fibrous growth.

The research also considered that blacks, in general, are more likely to develop some conditions that involve scarring and that scarring is one of the results linked to the beginning of CCCA.

Consequently, the findings of the research show that CCCA-linked scarring is resemblant to the type of fibrous-tissue scarring associated with fibroids, which could be the reason why there is a higher risk to develop fibroids with the hair-loss condition.

Perms, chemical relaxers and other reasons why Black women suffer the most from uterine fibroids

Traction Alopecia: A common form of hair loss doesn’t have to be permanent