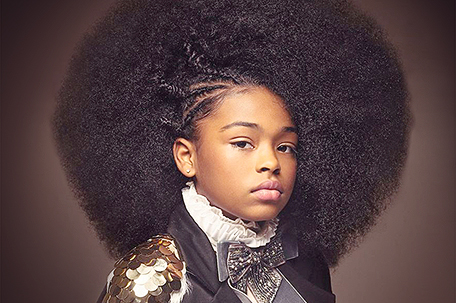 ATLANTA –The kinks. The waves. The twists. The blooming afro.

A year ago, the owners of CreativeSoul Photography launched the “AfroArt’’ series, which features African-American girls in all their natural hair glory.

Although the series was shot a year ago, it recently went viral, thanks in part to social media shout outs from celebrities like Taraji P. Henson, Morris Chestnut and Tia Mowry.

The collection is powerful in its entirety.

The collection includes 25 photos shot around the nation with various themes.

There was steampunk in New York. The Baroque period in Dallas. Bejeweled and crowned queens in Los Angeles and AfroEarth in Oakland, where natural elements were used to adorn the models’ hair. The girls range in age from 4 to 13.

“It was cool to showcase those eras in a new light,’’ she said. “This was not something people had seen before.’’

When the husband-and-wife team first sent out calls for young models, parents would sometimes get their children’s hair straightened for the session, “because that’s what they thought they needed to get into the industry, to be a top model or actor.’’ 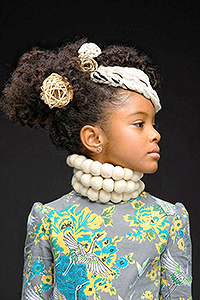 One of the girls pictured in the series is Phoenix Lyles, 10, a fifth-grader at King Springs Elementary School in Smyrna, who has worn natural hair since she was even younger.

The attention doesn’t faze her. “I feel pretty good with natural hair,’’ she said.

It’s more acceptable in many circles. Commercials, print ads and films and television shows often feature children and teens with locs, Afros, twists and the like.

Rita Harrell, co-owner of Big Picture Casting in Atlanta, which has worked with clients like Nike and Wal-Mart and on projects like “Hangman’’ and “Vengeance: A Love Story,’’ said it’s much more commercially acceptable, “even desired’’ than it used to be.

She thinks it’s the general trend toward multiculturalism in advertising. “They want to make sure all types and all walks of life are represented.’’

They often hear from parents who said they showed their daughters the photos “so they can love their natural hair. They go to school and they want to cover it up.’’

The two enjoyed a bicoastal romance before marrying in 2011. Kahran, 37, lived in Oregon and Regis, 40, lived in his native Maryland. They met during an online graphics design forum. They decided to move to Atlanta, when Regis enrolled at Gwinnett Technical College to study photography.

His wife, who nurtured a love for photography, would learn along with him.

In 2009, they started a photography business. It was satisfying, but something was missing.

They slowly backed away from the part of the business they didn’t enjoy as much, such as shooting weddings and newborns.

“It did not make us as happy as when shooting kids,’’ she said. “They (children and youths) can be interesting. They like being in front of the camera, and they’re usually full of personality. A little bribe with Skittles and they’re good.’’

Adults, on the other hand, were found to be more stressful, said Regis.

“I’m a child myself,’’ he said. “Adults are too worried about how people see them or things like their weight.’’

The goal, said Regis, is to take the project global.

He said they’ve gotten requests from the United Kingdom and various nations in Africa. How are they dealing with their newfound fame?

“It’s weird to go to another country and people recognize you on the street,’’ he said. “I don’t think that’s normal for photographers.’’