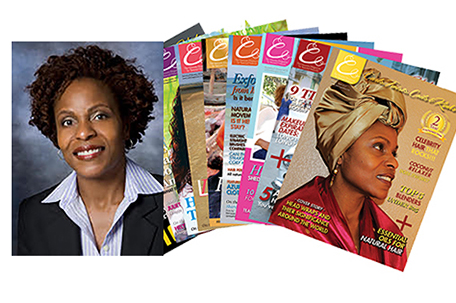 Growing up, Turner always loved magazines – she is a self-proclaimed magazine junkie! It was always her dream to become a journalist. She attended CUNY-City University of New York, completed her internship at CNN-New York and later graduated from the Connecticut School of Broadcasting and Journalism. Her first taste of the magazine business began when she worked for “New Jersey Goodlife Magazine”, a family owned New Jersey based publication. She moved back to New York to work for Colgreene Broadcasting Group as their news anchor/news director at WHUC/WRVW radio stations. She later became a licensed cosmetologist in Pennsylvania, and owned a salon in Philadelphia for five years.

In 2009, Turner decided to stop chemically straightening her hair, she learned quickly that there were no magazines that catered to the needs of this specific niche market and in 2013, so CTCK Magazine was born. It is her mission to make this publication the authoritative resource guide for all ethnicities with textured/curly hair. CTCK Magazine provides relevant editorial content, advice, support and perspective to all ethnicities with textured hair. Another passion for Turner is her love for children, and her mission is to empower and inspire youth of color and all with textured hair, to rock their natural hair, with confidence by showing them positive examples and role models who look just like them. She feels strongly that it is our responsibility to teach our children that they have the right to express themselves, they are beautiful just the way they are, and to stand strong and confident when being ridiculed or harassed for wearing their hair in its natural state.

To give back to her community and help others start up minority businesses, Turner likes to spotlight up and coming business owners in her publication, in hopes that it will in some way help them grow their brand.

CTCK magazine is growing, and Turner is working on new strategies to increase brand awareness and sales. Her goal is to add value beyond the current core customer base by expanding the reach and making the magazine available for purchase at booksellers, superstores, drugstores and supermarkets. She welcomes natural hair bloggers, celebrities with natural hair and the news media looking for a content resource or reference source. Currently the magazine is published bi-monthly. The ultimate goal is to publish 12 issues annually.

CTCK magazine is available for purchase nationally in print and downloadable to all smartphones, tablets and computers via www.ctckmagazine.com

Is my hair natural if I ‘texlax’?