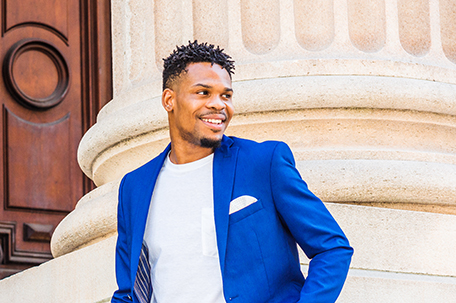 In 2017, hairstyles for African-American men are expected to vary from close-shaved conservative looks to long dreadlocks or cornrows. However, in barber Henry Prince’s estimation, natural hairstyles will reign this year, while more modern adaptations play a secondary role.

And, while the new year signals a change in hairstyle for some men, Prince advises them to consider a hairstyle that suits their lifestyle, the natural curl or kinkiness of their hair and the shape of their faces.

“Black men will wear hairstyles that are expressive, freeing, liberating, and those styles will reveal philosophies they ultimately intend to convey,” articulates the Philadelphia barber.

And, any of the styles below can update any man’s look, according to Prince.

A quintessential look for black men, both young and old, is the fade. It has been a staple hair cut as far back as barber Tim Randall can remember. “It’s simple and effective, clean and conscious, and exudes characteristics of a mature man who’s smartly cut,” explains Randall, who believes it is a haircut that is aesthetically appealing when executed properly.

“What matters most here is finding a barber who can cut with precision and skill,” says Randall, who continued to explain that hair can be shaved short, close to the head; similar to short, military haircuts.

Many are stretching the design frontier, said Randall, who notes that geometric patterns or words can be shaved into close-cropped hair on the side of the head for an individualistic look.  A variation on this style, he says, is the taper fade, where the hair is cut longer on top and becomes shorter as it proceeds down the neck.

Dreadlocks, or “dreads” were first associated with Jamaican culture and popularized by musician Bob Marley. Dreads, which can be worn short, medium or waist-length, are created by twisting sections of hair into large clumps or dreads/locs, describes locktician Lester Johnson, who further explains, “This look also may be achieved by using an expensive chemical process, or backcombing and teasing small sections of hair into dreads.”

Wax or cream can be used during the initial “locking” process to keep dreads in place. They also may be dyed different colors or decorated with beads.

Ultimately the end product of natural black hair, locks are among the most traditionally acceptable pro-black hairstyles, according to Randall. “They’re rich in heritage and deeply rooted in individualism,” he says. “For upkeep it is a hairstyle that demands a good locktician every once in a while for a re-twist, and you will need to moisturize your scalp when needed.”

When naturally curly, kinky hair is picked into a puff around the head, the result is an Afro, or ‘fro.’ According to Ernest White, who began plying his barbering skills in 1973, this style can be worn from one inch to several inches high. “While higher, elaborate Afros were popular in the 1960s and 1970s, shorter styles are still in vogue today,” according to White.

White has seen scores of younger African-Americas embrace the natural hair movement. “The natural hair trend has become a driving force in the hair industry. Manufactures are constantly developing new lines of haircare products and services to meet the demand,” observes White.

Hair stylist and barbers are becoming innovators as well of notes White, who speaks of changing delivery services, such as mobile hair salons, and customized haircare routines designed to help clients maintain their natural hair styles.

The “Natural with Textured Curl” It is often designated as the most popular hairstyle for youthful, fashion-conscious African-American men. It also is a look that is described as “undefined” and “unique” to the wearer. At best it can be described as “The Natural,” which captures a myriad of variations.

According to stylist Darryl James, the style features natural curls up top of the head and a tapered side and rear. “The taper pulls the look together, securing it via a sharply defined line,” explains James.

“The key to maintaining the curls is locking in the hair’s natural moisture,” says James, who also explains that there are an array of available, reasonably-priced conditioners that will do the job.

James advises men not to shampoo their hair more than twice a week at most. “There’s nothing worse than dried out curls,” he lectures. African-American men who prefer a curly hairstyle can use pomade, a gel-like substance to hold curls into position,” notes James. “Tapering the sides so they are just long enough to hold a curl is another way to achieve this look without pomade or wax.”

The shaved head largely remains the domain of middle-aged black men. According to James, when a man’s hair begins to thin at the temples or the center of his head, it might be time to let it go. He also urges men to embrace their baldness, which speaks of a look of sophistication and maturity.

James points to the appeal of men with bald heads like Michael Jordan, Tyson Beckford, Morris Chestnut, Common and or Boris Kodjoe. “They have appeal because they appear graceful and poised, cognizant of their place in life and not forcefully holding on to something that has long left them,” expounds James.

The hairstyle is not without its advantages according to James. “A completely shaved head eliminates the need to care for or style naturally curly hair. This sleek look requires daily shaving, which has its own drawbacks,” says James. He advises that men choosing this style should apply special formulated creams to protect the skin on the top of the head and neck from razor bumps. Splashing the head with cold water or applying witch hazel after shaving will also guard against bumps.

Barber Collen Shirley pokes fun at Black Millennials, who he believes don’t care what other people choose to think about them. The attitude he said also translates into their hair choices. “As a group they (Millennials) they are more progressive and very happy to be nappy or kinky, a far cry from the days of  “The Process” and “Jheri Curls”.

“They have embraced this look realizing it is ultimately what they make it. Wear it short, long or somewhere in between. The key is allowing your hair to follow its natural course” says Shirley.

The choice of the hairstyle, in Shirley’s opinion, speaks volumes about a young man’s confidence. “To truly maximize this look your confidence must reach great heights. The smoothest guy in the room is always noticed and his natural hair is an extension of the attitude he exudes.”